The impact and risk analysis (Herron et al., 2018c) investigated how hydrological changes due to additional coal resource development may affect water-dependent assets, such as bores, wetlands or heritage sites.

More than 2200 water-dependent assets listed in the asset register (Dataset 10; Bioregional Assessment Programme, 2017; Macfarlane et al., 2016) were analysed for the subregion (Table 2). They include:

Potential impacts on most water-dependent assets were assessed by overlaying their extent on the zone of potential hydrological change (Figure 8). The assessment took a precautionary approach: it identified potential impacts if an asset or any part of it is within the zone.

Ecological changes were not predicted for assets, because receptor impact models (Box 8) were developed for landscape groups and not individual assets. However, an example of a more detailed analysis of a specific asset (‘potential distribution of Malleefowl (Leipoa ocellata)’) is provided in Herron et al. (2018c) to illustrate the type of approach that could be undertaken to assess impacts at a finer level of detail.

The greatest confidence in regional hydrological modelling results is in those areas that are very unlikely to be impacted. Where potential impacts have been identified, further local-scale modelling may be required to determine the likelihood and magnitude of impacts.

Economic asset numbers are not individual bores but water access entitlements that could include one or multiple bores or water rights. Potential impacts on water-dependent assets were assessed by overlaying their extent on the zone of potential hydrological change.

Other assets outside the zone and very unlikely to be impacted include:

The critically endangered Wollemi Pine, which has a potential species distribution of 137 km2 in the zone, is considered unlikely to be impacted because it is a rainforest species and not dependent on groundwater.

Groundwater-dependent ecosystems and potential habitats of species make up nearly 90% of the ecological assets found in the zone of potential hydrological change.

Five areas in the Collaborative Australian Protected Area Database overlap with potentially impacted groundwater-dependent ecosystems, including 3.6 km2 of the 54 km2 of the Hinterland Spotted Gum Endangered Ecological Community, which is associated with 1.3 km2 of wet and dry sclerophyll forests and 1.5 km2 of forested wetlands.

Economic water-dependent assets are made up of surface water and groundwater sources and their associated water access licences and basic water rights, and water supply infrastructure.

Fifteen unregulated and alluvial water sources are outside the zone of potential hydrological change and are very unlikely to be impacted.

Mardi Dam and Grahamstown Dam are outside the zone and natural inflows are unlikely to be impacted. However, Mardi Dam is filled by pumping water from Wyong River and Ourimbah Creek, so the extent to which additional coal resource development impacts streamflow in Wyong River, water supply to Mardi Dam could be affected.

There are 3831 water supply bores and surface water extraction points in the zone that are potentially impacted (Figure 14).

Impacts on economic assets were assessed in terms of changes in water availability, reliability of supply and potential for invoking ‘make good’ provisions under the NSW Aquifer Interference Policy (NSW Office of Water, 2012).

This reduction in water availability is indicated by the change in mean annual flow. Flow reductions in the regulated river can be managed through increasing the volume of water released from Glenbawn and Glennies Creek dams to meet environmental water requirements, which could have an impact on available water determinations for consumptive users.

In the Singleton, Muswellbrook, Jerrys and Wyong River water source areas, reductions of 0.2 to 2.9 GL per year are very likely, and it is very unlikely that these reductions will exceed 3 to 6 GL per year.

Change in the the number of cease-to-pump days per year due to additional coal resource development was used as an indicator of impacts on reliability of supply. ‘Cease-to-pump’ rules attach to most water sources in NSW to ensure sufficient water is retained in unregulated rivers to meet environmental requirements. Potentially significant changes are possible for the Wyong River and some creeks in the Singleton, Jerrys and Muswellbrook water source areas. In all these water source areas, the modelled results show a highly varied response. In the Wyong River, this ranges from a 5% chance that there is no impact on cease-to-pump days, a 50% chance of 8 additional cease-to-pump days and a 95% chance of fewer than 145 additional cease-to-pump days (Section 3.5.3.3.2 in Herron et al. (2018c)). Incorporating local-scale hydrogeological information into the analysis for the Wyong river basin (which was carried out in only this basin) reduced the magnitude of this change substantially. 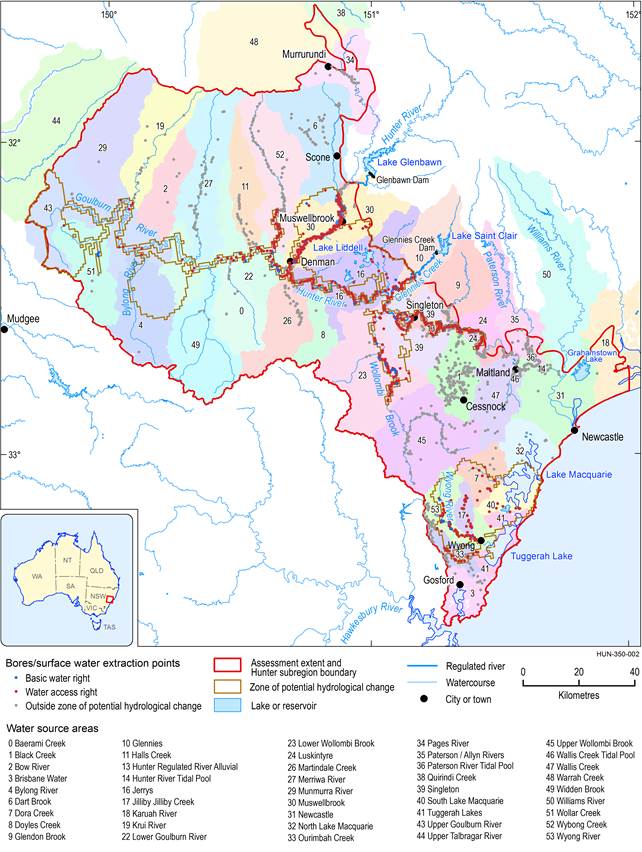 The NSW Aquifer Interference Policy specifies minimal impact thresholds for highly productive and less productive groundwater sources in NSW. Generally, if drawdown from activities that interfere with aquifers exceeds 2 m, then ‘make good’ provisions should apply, unless it can be demonstrated to the Minister’s satisfaction that the variation will not prevent the long-term viability of GDEs or culturally significant sites nearby.

Of the 13 bores where it is very likely that groundwater drawdown will exceed 2 m, 7 are water access licences, 3 are basic water rights, and 3 fall in the mine pit exclusion zone. All 13 bores are on mining leases.

Of the 170 bores where drawdown greater than 2 m is possible, 50 are within the mine pit exclusion zone where drawdown estimates are uncertain but highly likely, and a further 109 are on mine lease areas. It is very unlikely that more than 11 non-mining use water supply bores in the Sydney Basin – North Coast groundwater source (7) and Jilliby Jilliby Creek (2), Tuggerah Lakes (1) and South Macquarie Lake (1) water sources would exceed the ‘make good’ provisions threshold; there is a 50% chance that there are fewer than five.

Of the 307 sociocultural assets in the Hunter assessment extent, 240 are outside the zone of potential hydrological change and it is thus very unlikely that they will be affected by hydrological changes due to additional coal resource development.

About 1.5 km2 of the Greater Blue Mountains World Heritage Area within the zone coincides with potentially impacted forested wetlands.

There are 67 water-dependent sociocultural assets within the zone of potential hydrological change; 45 of these are built infrastructure and 22 are reserves or national parks. The Bioregional Assessment Programme does not have the expertise to comment on potential impacts of changes in hydrological regimes on built infrastructure. The reserves and national parks overlap with 13 km2 of potentially impacted groundwater-dependent ecosystems and 84 km of potentially impacted permanent or perennial streams.