In the Hunter subregion (Figure 2), the assessment extent (the total area investigated) is the same as the subregion extent, which covers 17,045 km2. It includes a large part of the Hunter river basin and all of the Macquarie-Tuggerah lakes basin in NSW. Major population centres include Newcastle and Gosford-Wyong along the coast, with smaller urban areas inland, including Maitland, Cessnock, Singleton and Muswellbrook.

The dominant land use along the subregion coast is urban, while grazing, production forestry and nature conservation dominate the hinterland areas of Gosford and Wyong. Mining, irrigated agriculture, viticulture and horse breeding are economically important land uses in the Hunter river basin. Water users include the urban, power generation and coal mining sectors; agriculture; and the environment. Environmental water and access to water for consumptive use are managed through water sharing plans that specify extraction limits and water access rights to surface water and groundwater sources.

The Hunter subregion is of great ecological significance because it corresponds to a break in the Great Dividing Range that provides a link between coastal and inland NSW, and includes an overlap between tropical and temperate climate zones. It includes the Ramsar-listed Kooragang Nature Reserve and Hunter Wetland Centre Australia, 17 important wetlands, 6 threatened ecological communities, 7 Important Bird Areas, and 105 nationally listed flora and fauna species.

This assessment focused on water-dependent ecosystems and assets in the subregion that are potentially impacted by changes in groundwater or surface water regime due to coal resource development.

Ecosystems in the assessment extent were categorised through a landscape classification (Box 6), based on the subregion’s geology, geomorphology (physical features), hydrogeology (the way water moves through porous rocks), land use and ecology. See ‘What are the potential impacts of additional coal resource development on ecosystems?’ for more information.

The community nominated assets that they consider important due to their ecological, economic or sociocultural values (Bioregional Assessment Programme, 2017; Macfarlane et al., 2016). These include ecosystems such as stream vegetation that provides habitat for frogs, groundwater used for agriculture, and sites of cultural significance. See ‘What are the potential impacts of additional coal resource development on water-dependent assets?’ for more information. 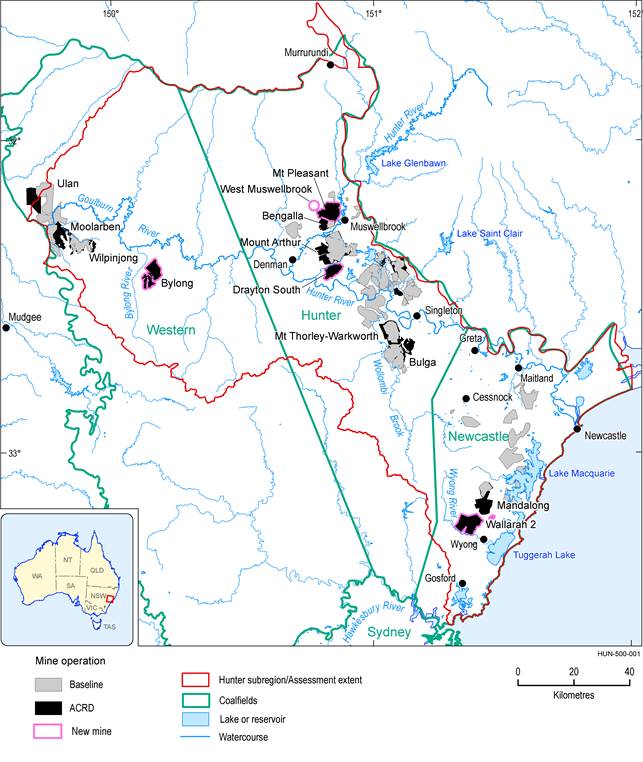 Figure 2 Mines in the coal resource development pathway in the three coalfields (Western, Hunter and Newcastle)

Coal mining has been occurring in the Hunter subregion since around 1800. In December 2012, there were 22 open-cut mines and 20 underground mines operating.

This assessment focused on the potential cumulative impact between 2013 and 2102 of additional coal resource developments. The timeline of construction and production for each coal resource development is shown in Figure 3. This figure also shows which developments were included in the quantitative modelling for the subregion. Some additional coal resource developments were not modelled at all (Austar underground, West Muswellbrook and Wambo), or were modelled using just the groundwater model (Chain Valley underground and Mandalong) or just the surface water model (Mount Arthur open-cut, Wilpinjong). More details can be found in the impact and risk analysis (Section 3.6 of Herron et al. (2018c)). Reasons for not modelling mines included insufficient data, scale of the proposed modifications, or mining under coastal lakes. Potential impacts from those non-modelled mines where hydrological changes are possible are discussed in Section 3.6 of Herron et al. (2018c). 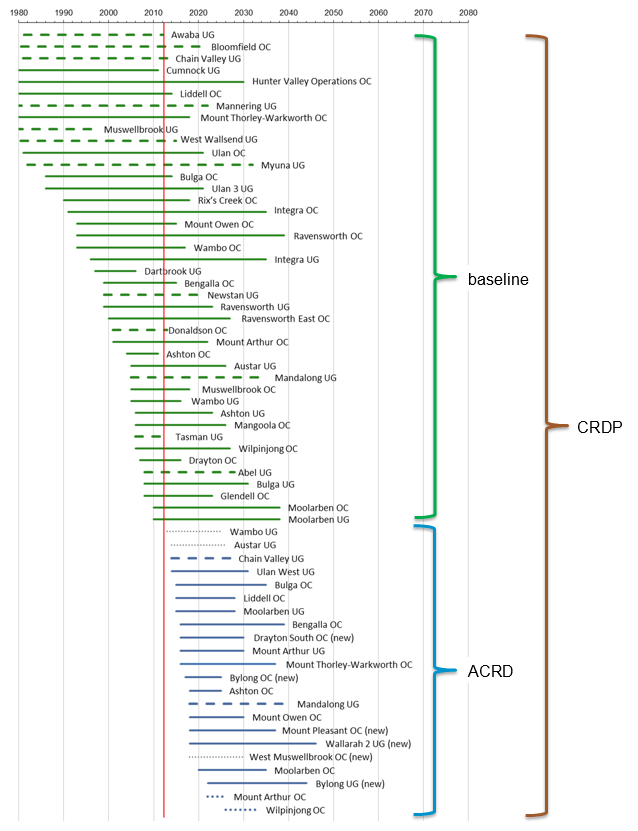 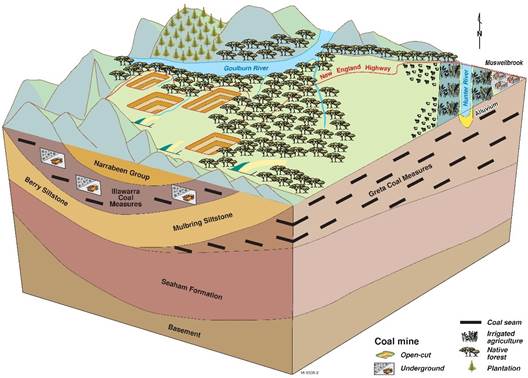 This section through the Goulburn river basin, just north of the Goulburn River, represents the area from Mudgee to Muswellbrook. The Berry Siltstone (Mulbring Siltstone in the Hunter Coalfield) is near the surface and provides an aquitard that moves water laterally and feeds surface springs and streams. Coal seams of the Illawarra Coal Measures are also near the surface in the west and subject to both open-cut and underground coal mine operations. In the east, the Greta Coal Measures become thicker and nearer to the land surface. 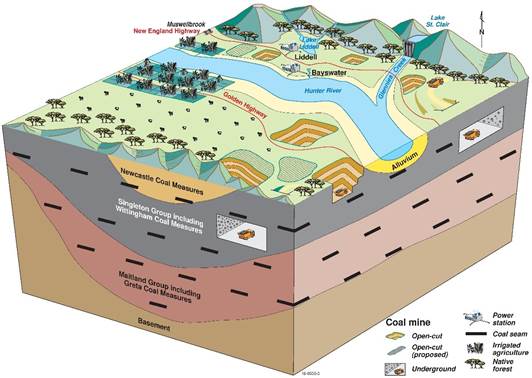 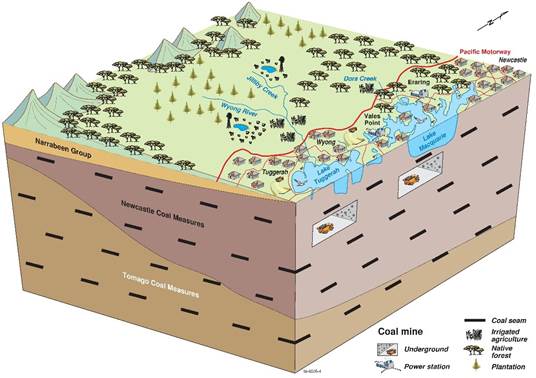