What are the potential hydrological changes?

In the Clarence-Moreton bioregion, surface water and groundwater modelling was undertaken to investigate potential hydrological changes in the Richmond river basin due to additional coal resource development. To represent changes in the near-surface aquifer from which most ecological assets source water, a zone of potential hydrological change (Box 3) was developed based on the groundwater modelling. This identifies the area where additional coal resource development may affect water-dependent landscapes and assets due to hydrological changes in the near-surface aquifer. Outside the zone, CSG development is very unlikely (less than 5% chance) to have any appreciable impact on hydrology, and therefore on water-dependent landscapes or assets.

The simulated median annual groundwater extraction due to the West Casino Gas Project corresponds to 0.02% of the median annual recharge in the modelled part of the Richmond river basin for the time period 2013 to 2042. This very small percentage is attributed to the relatively small number of CSG wells, the hydraulic properties of the coal seams, and the high rate and volume of recharge to the Lamington Volcanics (most of which then discharges rapidly to streams and alluvial aquifers). Likewise, the predicted changes to surface water flows are insignificant because the streamflow rates in the Richmond river basin are overall very high (also driven to a large extent by the Lamington Volcanics) relative to the CSG groundwater extraction volumes.

Potential changes in drawdown were assessed for all hydrogeological layers shown in Figure 3, except for the Bundamba Group that underlies the Walloon Coal Measures. 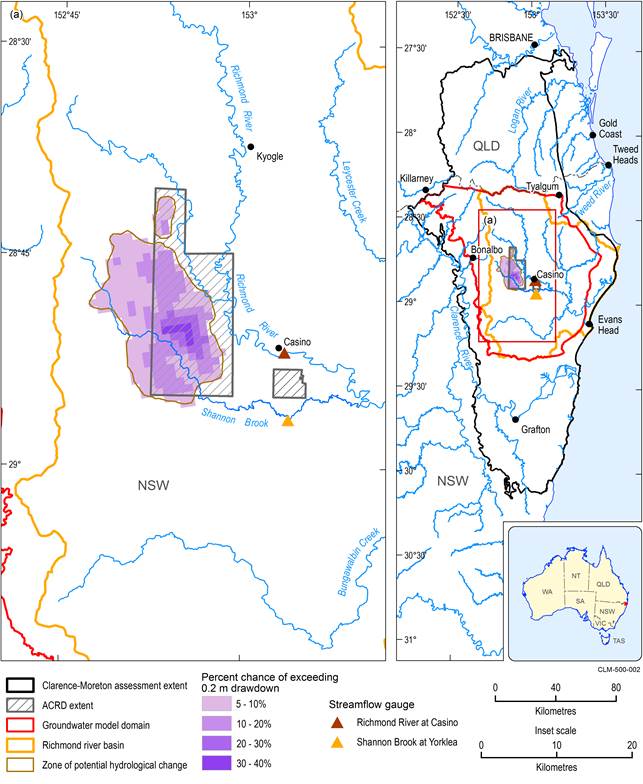 Figure 5 The percent chance of exceeding 0.2 m drawdown in the near-surface aquifer due to additional coal resource development

This figure shows the drawdown due to additional coal resource development (ACRD, in this case West Casino Gas Project), which is obtained by subtracting drawdown under the baseline from drawdown under the coal resource development pathway. The Clarence‑Moreton assessment extent is the area within which potential impacts to groundwater and surface water systems are investigated in this assessment. Only groundwater hydrological changes were used to define the zone of potential hydrological change. 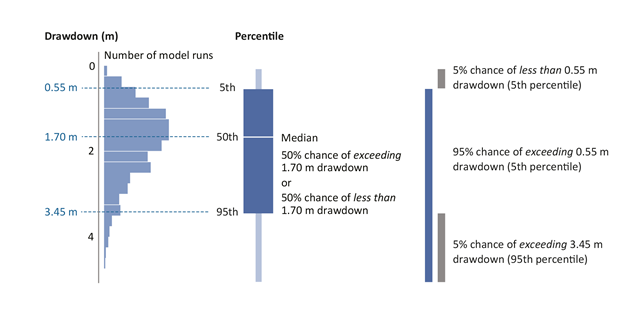 The chart on the left shows the distribution of results for drawdown in one assessment unit, obtained from an ensemble of thousands of model runs that use many sets of parameters. These generic results are for illustrative purposes only.

Analysis of the surface modelling results indicates that it is very likely (95% chance) that the reduction in annual streamflow would not exceed 100 ML/year in the Richmond River due to additional coal resource development. This maximum change is modelled to occur at Casino and represents less than 0.1% of the annual streamflow at that point.

Accurate measurement and modelling of low flows is very challenging, and leads to high uncertainties in predictions. The largest effect on low flows (i.e. the lowest 1% of streamflow) is predicted in Shannon Brook, where the median result is a reduction in streamflow of 20%.

Due to the likelihood of very small hydrological changes to surface water and the near-surface aquifer, further impact and risk analysis was not carried out.