The Clarence-Moreton bioregion spans north-east NSW and south-east Queensland, covering an area of about 24,292 km2, about 9,500 km2 of which is in Queensland (Figure 1). In NSW it contains much of the Clarence and Richmond river basins, while in south-east Queensland it covers the mid and upper parts of the Logan-Albert river basin, Bremer river basin, Lockyer Valley, and parts of the Brisbane river basin. It contains nationally important wetlands, numerous national parks and forest reserves, and sites of international importance for bird conservation. It includes potential habitat for 432 threatened species under Queensland, NSW and Commonwealth legislation.

The outcrop area of the aquifers of the Lamington and Main Range volcanics is the major groundwater recharge area within the Clarence-Moreton bioregion, particularly in the Richmond river basin where most of the surface water runoff is generated. Recharge rates to these aquifers are at least ten times higher than recharge rates to sedimentary bedrock units such as the Walloon Coal Measures.

The bioregion’s main natural and human-modified ecosystems were categorised in a landscape classification that was based on the physical features of the region, including its geology; hydrogeology, which describes the way water moves underground; land use; and ecology (see What are the potential impacts of the hydrological changes? for more information).

The West Casino Gas Project was identified as the only additional coal resource development for the assessment. It was an exploration and pilot production CSG development in the Richmond river basin, with plans to later progress to a commercially producing gas field. The proposed project was located in this area due to the presence of coal seams with high gas saturations and permeabilities within the Walloon Coal Measures. These coal seams are located along the western side of the Casino Trough at depths as shallow as 250 m. This assessment assumed that the West Casino Gas Project would begin commercial CSG production in 2018, extracting gas for 20 years from around 90 production wells, each with two lateral extensions into the productive coal seam. 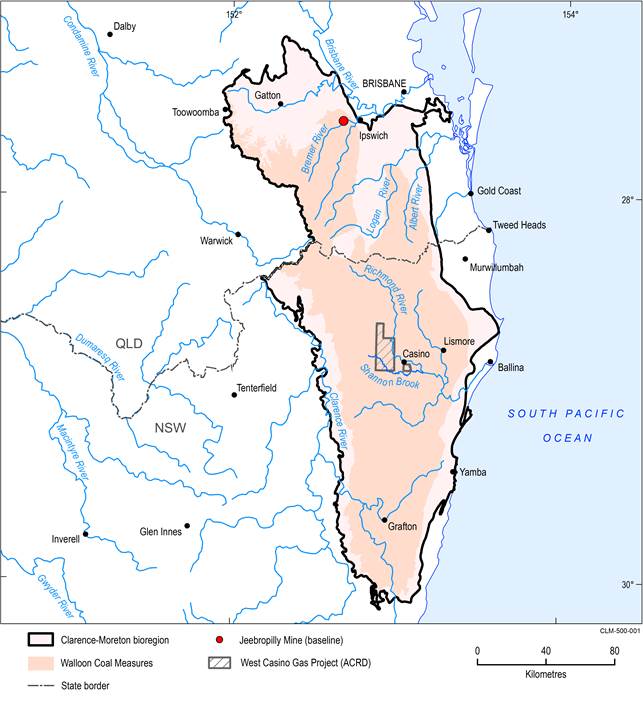