Freshwater wetlands occur on areas where perennial or permanent inundation by water, either still or moving, dominates ecological processes. They occur in a range of environments where local relief and drainage result in open surface water at least part of the time and this often plays a range of vital roles in the functioning of ecosystems. The periodicity and duration of inundation in wetlands often determines, to a large extent, the suite of species present as do the extent and depth of water. The ‘Freshwater wetland’ landscape class within the zone of potential hydrological change is entirely comprised of Keith’s (2004) ‘Coastal freshwater lagoons’ vegetation class (1.2 km2).

The ‘Freshwater wetland’ landscape class was described as a complex of marsh (littoral) and pond (open water) habitats, where the relative area of each habitat type was determined by the average level and degree of fluctuation in the water surface (Figure 28). Where water levels or the relative amount of fluctuation in water levels (WLF) are reduced, then growth of emergent Typha (Typ) increases (Deegan et al., 2007), causing an expansion of marsh at the expense of pond areas (PA/MA). Sedge and rush vegetation (S&R) in marsh habitats provides substantial input into the detritus cycle (DC) of the marsh, which is the principal basal resource for production of invertebrates (Inv), and where the decomposition of this organic matter is controlled by the natural fluctuation in water levels (Pabst et al., 2008). Sedge and rush vegetation provide key habitat for invertebrates, but also wetland frogs (WF) and small predators (SPr), including insectivores such as the vulnerable (NSW’s Threatened Species Conservation Act 1995) white-fronted chat (WFC) and the reed warbler (RW). Larger predators (LPr) such as foxes and eagles, which target populations of small predators, sit at the top of the food chain.

Vegetation in the ponds (open water) include submerged macrophytes (SM), floating macrophytes (FM) and algae (Alg), the growth of which are controlled primarily by the supply of nutrients and light (Boulton et al., 2014). Floating macrophytes can act to shade and suppress the growth of submerged macrophytes, which can also be impacted by herbivorous birds (HB) (Perrow et al., 1997). The growth of algae is controlled by the degree of light penetration (LP) through the water column. Algae is the principal food resource of herbivorous aquatic invertebrates (AI), which in turn sustain populations of turtles (Tur), fish (Fis) and their predators. Terrestrial invertebrates and aerial stages of aquatic invertebrates are prey for birds, such as the white-fronted chat. 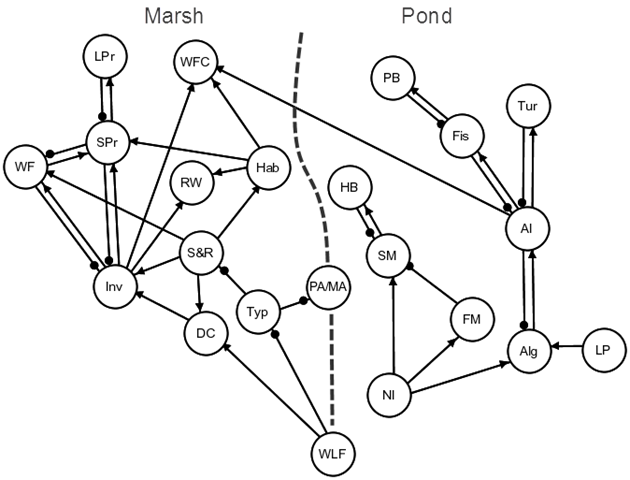 Given that the best available information is that these wetlands are likely to be dependent on local, perched groundwater systems, no cumulative impact scenarios were developed for qualitative analyses of the model system, and no quantitative models were developed for this landscape class.