River basins in the Hunter subregion include the Hunter, Macquarie-Tuggerah Lakes, Upper Namoi and Lower Karuah (see Figure 4 in companion product 3-4 for the Hunter subregion (Herron et al., 2018)). Only the Hunter river basin and Macquarie-Tuggerah lakes basin intersect the zone of potential hydrological change. The Hunter River is the largest river in the subregion and is fed by a number of significant tributaries, including Pages River, Dart Brook, Goulburn River, Glennies Creek, Wollombi Brook, Glendon Brook, Paterson River and Williams River. The total Hunter river basin area is 21,437 km2, of which 14,886 km2 is in the subregion. The Hunter River descends 1397 m over its 468-km course from its upper reaches in the Barrington Tops (outside the subregion), through the Hunter Valley, and out to sea.

Ecologically important components of the hydrograph can be broadly summarised (Dollar, 2000; Robson et al., 2009) as cease-to-flow periods, periods of low flow, freshes, and periods of high flow (including overbench and overbank flows) as illustrated in Figure 6. Longitudinal, lateral and vertical connectivity are enhanced with increasing flow. Increasing flow increases connectivity between habitats and enables greater movement of aquatic biota, water-borne nutrients, and fine and coarse particulate organic matter. Flow regimes determine natural patterns of connectivity, which are essential to the persistence of many riverine populations and species (Bunn and Arthington, 2002). High flows are especially important for lateral connectivity and channel maintenance. Low flows are critical for maintaining vertical and longitudinal connectivity, and water quality of inundated habitat including pools. Freshes can trigger fish spawning, maintain water quality in inundated habitats and cleanse and scour the riverbed. A lack of vertical connection to groundwater can result in cease-to-flow periods during periods of little or no rainfall. Cease-to-flow events dry out shallow habitats and can create chains of pools, isolated pools or completely dry riverbeds, depending on riverbed morphology (Robson et al., 2009). The limited lateral, vertical and longitudinal connectivity associated with the zero-flow condition is illustrated in Figure 7, where an isolated pool persists between dry riffle beds and the groundwater level is below the channel bed.

During periods of low flow (Figure 8), lateral connectivity is likely to be limited; however, low flows are important for maintaining vertical connectivity to the hyporheic zones of the streambeds (Ward, 1989; Kondolf et al., 2006), and for maintaining longitudinal connectivity within the landscape by linking instream habitats and allowing dispersal of instream biota (Dollar, 2000; Robson et al., 2009; Marsh et al., 2012; Boulton et al., 2014). The hyporheic zone is defined as the saturated interstitial areas beneath the streambed and into the banks that contain some channel water (White, 1993). Low flows provide seasonal habitat for many species and can maintain refugia for other species during droughts (Dollar, 2000). In regions with seasonal rainfall, low flows are maintained by baseflow, which is generally considered to be groundwater contribution to the hydrograph, hence the importance of the vertical connection of the riverbed to groundwater. In a synthesis of case studies, Marsh et al. (2012) concluded that increasing durations of low flow are correlated with declining water quality (increased temperature and salinity and reduced dissolved oxygen), and that this is a primary driver of ecological responses, especially in pools. Riffle habitats are not only affected by changes in water quality but also reduced habitat area, as riffles dry out and contract. For example, Chessman et al. (2012) reported that aquatic macroinvertebrate assemblages that had been exposed to severe flow reduction or cessation during the period prior to sampling would be dominated by taxa tolerant of low oxygen concentrations, low water velocities and high temperatures, whereas assemblages not exposed to very low flows would be dominated by taxa that favour cool, aerated, fast-flowing conditions. Riffle habitats that are characterised by faster flowing, well-oxygenated water tend to be the first habitat type to be impacted by reduced river discharge. Marsh et al. (2012) also concluded that communities in streams that are usually perennial but cease to flow for short periods (weeks) will mostly recover the following season but that the community composition will decline if cease-to-flow periods recur over consecutive years.

Although lateral connectivity is limited under no- and low-flow conditions, riparian vegetation may directly access alluvial groundwater, in addition to perched watertables within the stream bank, or riverine water. The contribution of groundwater to evapotranspiration is likely important for maintaining function of the riparian vegetation (Dawson and Ehleringer, 1991) and may be higher during periods of low flow (Lamontagne et al., 2005). 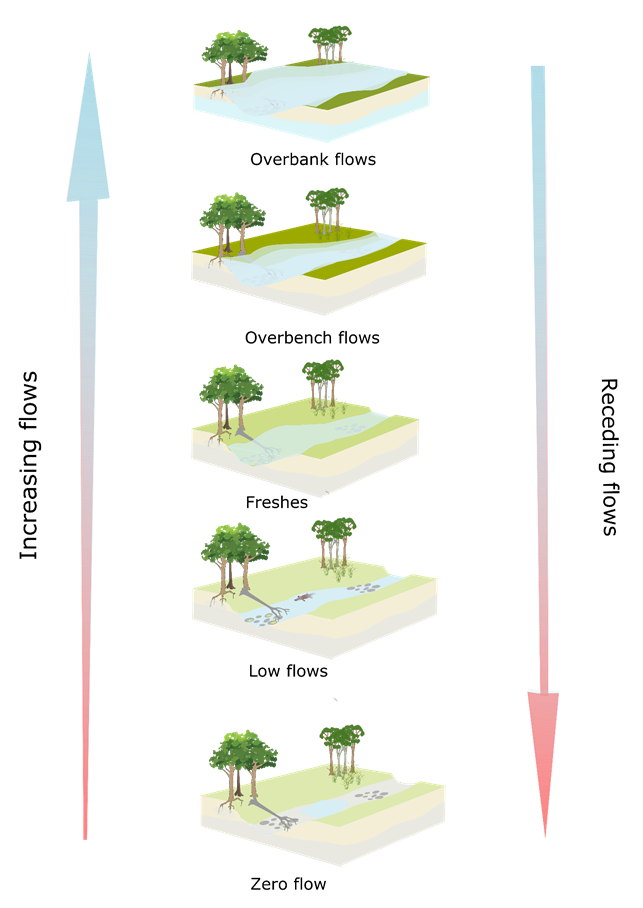 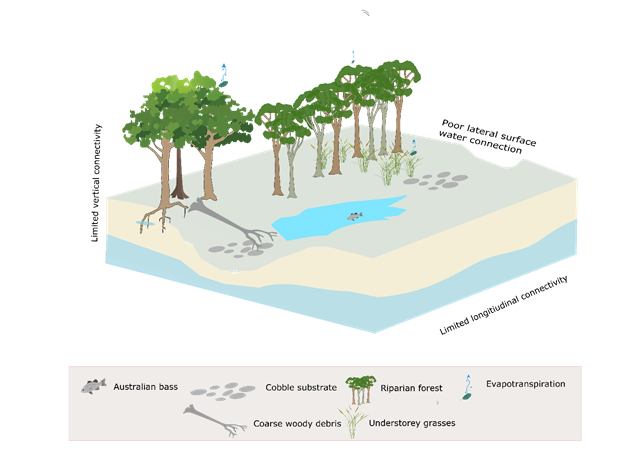 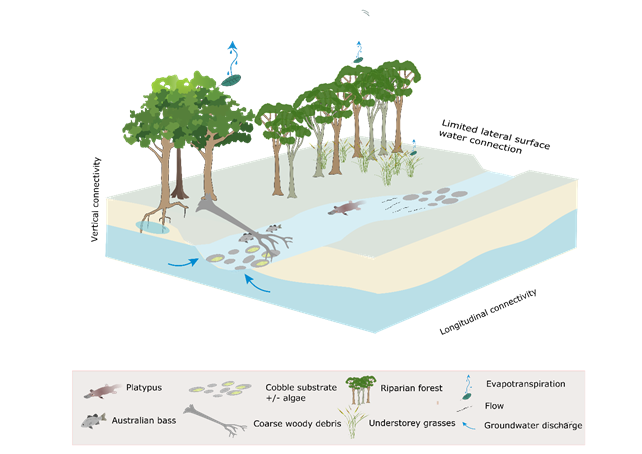 Freshes (Figure 9) are defined as flows greater than the median for that time of the year (Robson et al., 2009). They can last for several days and typically increase the flow variability within the stream as well as play an important role in the regulation of water quality through inputs of freshwater. Freshes can mobilise sediment, inundate larger areas of potential habitat, and connect in-channel habitats – thereby permitting migration of aquatic fauna (Robson et al., 2009). Freshes can increase vertical connectivity between the streambed and the hyporheic zone by scouring and cleansing the riverbed (Hancock and Boulton, 2005), and can trigger spawning in some fish (King et al., 2009). Freshes increase lateral connectivity beyond that of low flows, and increase soil water availability in stream banks through increased bank recharge, helping to support the health and vigour of woody and herbaceous vegetation. 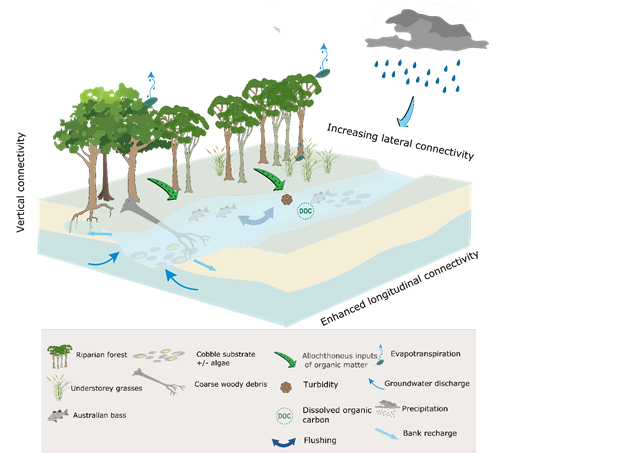 Figure 9 Conceptual model of streams during periods of freshes flow

The longitudinal connectivity is enhanced when compared to the low-flow conceptual model (Figure 8).

High flows (Figure 10 and Figure 11) inundate specific habitats and restore riverbed morphology (Robson et al., 2009). In the event of flooding they can also reconnect floodplains to the rivers and streams, fill wetlands, improve the health of floodplain trees and trigger waterbird breeding (Robson et al., 2009). High flows are often categorised ‘wet-season baseflows’, ‘bank-full flows’ and ‘overbank flows’ (e.g. Robson et al., 2009). For consistency with terminology used by experts during elicitation workshops (see Section 2.7.3.2), ‘overbench flow’ is used to represent both wet-season baseflows and bank-full flows. A bench is a bank-attached, narrow, relatively flat sediment deposit that develops between the riverbed and the floodplain.

Overbench flows partially or completely fill the channel for longer periods than freshes; typically weeks to months. Practically all habitat components within the river channel will be wetted including boulders, logs, and lateral benches (if present), and the entire length of the channel is connected with relatively deep water, allowing movement of biota along the river (Department of Sustainability and Environment, 2003). As for freshes, some native fish species rely on seasonal high flows during winter and spring as cues to start migration and prepare for spawning (Department of Sustainability and Environment, 2003), such as diadromous (migrates between fresh and estuarine waters) and potamodromous (migrates wholly within fresh waters) species.

Increased flow rates, such as during bank-full flows, scour banks and river substrate, and increase stream bank erosion. Bank erosion is accentuated under high discharge (bank-full conditions), with the effectiveness of these erosional forces being a function of bank condition and the health of the riparian vegetation (Brierley and Fryirs, 2005), in addition to factors such as particle shape, density, packing and biological activity such as algal growth (Boulton et al., 2014). Bank slumping or undercutting can create new habitats and contribute additional coarse woody debris to streams. Logs, sticks and root masses in the channel create depositional areas for sediment and for particulate organic matter. Localised increases in velocity profiles around snags scour out pools or undercut banks that provide habitat for large fish and other organisms such as platypus (Boulton et al., 2014). Scouring of the benthic algal communities, often considered to be the main source of energy for higher trophic levels, can temporarily reduce stream primary production (Davie et al., 2012). Benthic algal communities often recover rapidly and grazing macroinvertebrates are able to feed preferentially on early-succession benthic algal taxa, whereas late-succession algae are less palatable or physically difficult to consume. High flow rates may also dislodge macrophytes and macroinvertebrates resulting in population drift downstream (Downes and Lancaster, 2010).

Overbank flows (Figure 10) inundate the surrounding floodplains, providing lateral connectivity, freshwater, nutrients and particulate matter to floodplain wetlands. These high-flow events also tend to enhance vertical connectivity providing a source of recharge for alluvial aquifers below the inundated floodplains (Doble et al., 2012) and recharge soil water reserves, which may promote seedling recruitment and promote health of the forested wetlands. However, Chalmers et al. (2009) also note that scouring of the floodplain can substantially increase seedling mortality. Connectivity to offstream wetlands, via overbank flows, enables replenishment of freshwater in these systems, and migration of riparian floodplain biota to and from the main channel. In some agricultural environments, these processes may lead to high loads of nutrients being imported to the stream environment, which may have deleterious effects on instream habitats through algal blooms (Boulton et al., 2014). 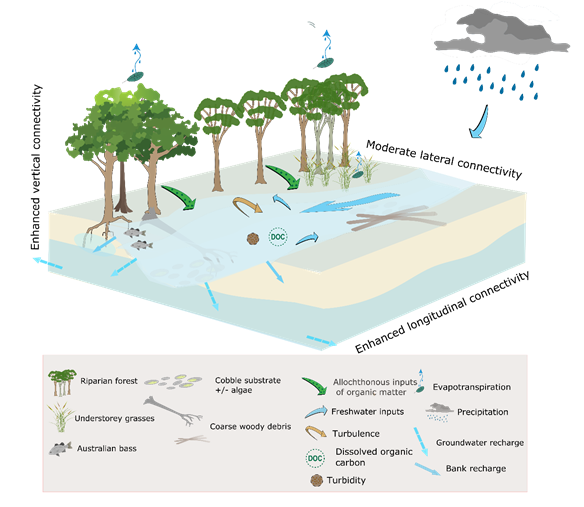 Figure 10 Conceptual model of streams during periods of overbench flow

Dashed arrows represent high uncertainty in relation to the flux. The enhanced connectivity is when compared to the freshes flow conceptual model (Figure 9). 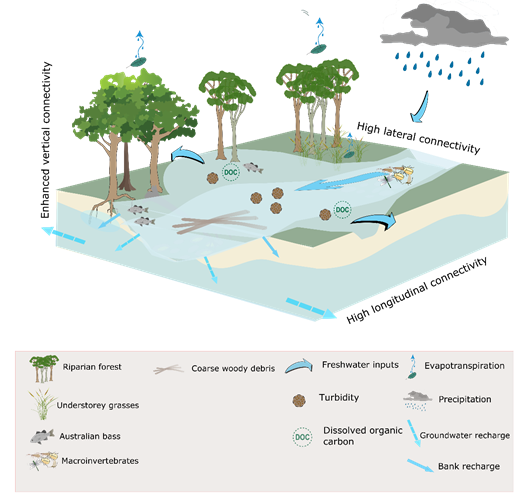 Figure 11 Conceptual model of streams during periods of overbank flow

The ‘high’ and ‘enhanced’ connectivity states are relative to the overbench flow model (Figure 10).