Mine workings, whether they are open-cut, longwall or bord-and-pillar mines, are represented by georeferenced polygons, which locate the ‘mine’ elements within the plan element mesh. As stated in Section 2.6.2.3.3.2, the plan mesh conforms, where possible, to the mine polygons.

Mine footprints were obtained from a number of sources, including existing digital data from some mining companies and the NSW Department of Trade and Investment, and footprints digitised specifically for the project from Landsat TM images of open-cut mines or from maps published in mine environmental assessment reports. Details of the source data can be found in Section 2.1.6 of companion product 2.1-2.2 for the Hunter subregion (Herron et al., 2018).

While a mine’s footprint varies over the life of the mine, a constant footprint was used in the groundwater modelling, broadly corresponding to the maximum footprint. Given the coarse resolution of the regional-scale groundwater model (minimum pixel size of around 500 m), the finer detail of individual roadways, chain pillars, bords, etc. are not represented in the model. In most areas, even individual longwall panels are not resolved. Figure 18 illustrates how an AutoCAD representation of the Whybrow workings of the Bulga Coal underground mine supplied by Glencore Coal has been represented in the groundwater model. The coarse-scale resolution of the polygons is clearly adequate within the accuracy of the finite-element mesh.

In all, 98 mine footprint polygons were used to define the mining areas for the CRDP in the Hunter subregion for groundwater modelling. Many of these polygons overlap as they represent multi-seam mining operations, or open-cut operations exhuming old underground operations. The full extent of mining footprints is shown in Figure 20 in Section 2.3.4 of companion product 2.3 for the Hunter subregion (Dawes et al., 2018).

Each mine working is associated with a working seam, which defines the approximate depth at which extraction occurs. As such, each polygon is also associated with a seam disc, which is the additional horizon representing a coal seam around mine workings that are included in the finite-element mesh (Section 2.6.2.3.3.1). Each polygon is superimposed upon its disc to yield a representation of the worked area in the model. Figure 9 illustrates multiple coal seam discs at Bulga coal mine. 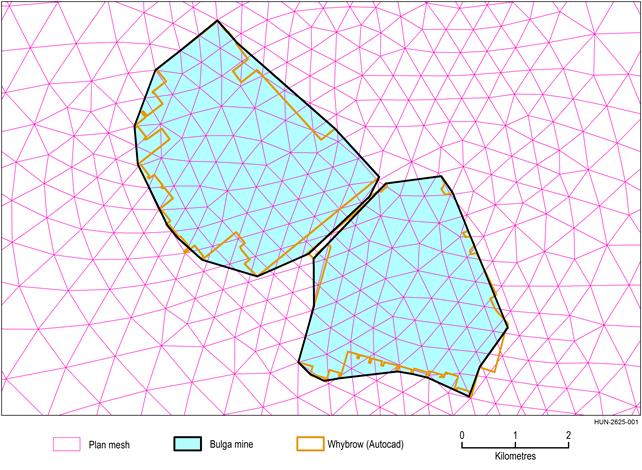 Figure 18 AutoCAD footprint of the Whybrow workings provided by Glencore Coal (brown) and the polygon generated from it (black and shaded) for Bulga Coal underground mine, overlain on the model mesh (pink)