The Hunter subregion contains many bores licensed to extract from groundwater (Bioregional Assessment Programme, Dataset 10). After removing points that lie outside the model domain and those associated with mine licence volumes which are already accounted for in the model via the water makes (Section 2.6.2.5), a total of 868 production bores were represented in the model (Bioregional Assessment Programme, Dataset 11). These are shown in Figure 17, and are placed at their correct depth relative to the discretised model topography.

The start date of each bore is known. The licensed extraction volumes (ML/year) are known, but not the actual volumes of groundwater removed in any given year. These extractions are potentially the greatest sink of groundwater in the region (apart from natural evapotranspiration), so represent a significant source of uncertainty in the modelling. For surface water extractions, WaterNSW water balance reports for the Hunter Regulated River between 2010 and 2015 indicate that, on average, slightly less than half (~46%) of the allocated volume is extracted for use (WaterNSW, 2016). Data for groundwater extractions are not available. Because groundwater extractions are assumed to be the same under the baseline and CRDP, the uncertainty associated with this unknown is unlikely to impact the quantification of hydrological changes of the additional coal resource development.

In the Hunter groundwater model it was assumed that the full entitlement is extracted at a uniform rate over the year at each bore. However, if the groundwater level drops below zero at the point, the extraction rate is reduced via a cubic function until it is zero when the groundwater level is 100 m below the point. This is rare and requires a confluence of parameters (low conductivity, porosity and rainfall) and the smooth cubic function is required to achieve rapid convergence of the numerical solver. In reality, extraction would cease once the watertable dropped below the screen of a bore, but continuing the water extraction in the model means the baseline and CRDP have the same bore extraction rates, which allows for a cleaner comparison of them. For example, consider a bore that extracts water for the entire baseline simulation. If a mine in the additional coal resource development caused drawdown at the bore, and if the bore ceased extracting water as soon as the groundwater level fell below the extraction point, then it would be difficult to compare the baseline and CRDP results, as the baseline would include an extracting bore, while the CRDP wouldn’t. 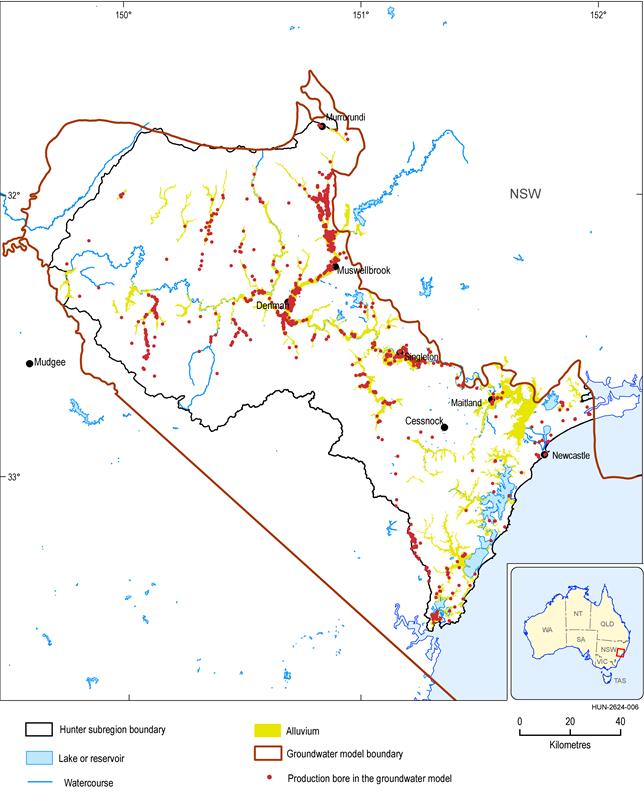