The stratigraphic units of the main coalfields of the Sydney Basin are shown in Figure 7. The Hunter subregion contains parts of the Western, Hunter and Newcastle coalfields (Figure 6). The vertical scale in the figure is based on formation age rather than depth below topographic surface, so it shows the correlation of the coal seams and intervening layers across the different coalfields (McVicar et al., 2015, Section 1.1.3).

In the Western Coalfields in the west of the subregion, the Hawkesbury Sandstone and Wianamatta Group form extensive, layered mesa-like plateaux, with the quartzose sandstone and conglomerate layers commonly acting as aquifers, whereas the lower-permeability shale and claystone layers of the Wianamatta Group are commonly aquitards. These stratigraphic units occur at or close to the surface across much of the south and south-west of the subregion and range in thickness from 90 to 700 m, generally thickening from west to east. Locally there are outcrops of the Illawarra Coal Measures, which dip gently to the east in the south-west and toward the north-east in the north-west of the subregion.

The Hunter and Newcastle coalfields, in the centre and eastern parts of the subregion, respectively, have a well-correlated stratigraphy, with mainly terminology differences between them (Figure 7). Various sandstone and conglomerate units, collectively part of the Narrabeen Group, cover the land surface to variable depth. In the northern section of these coalfields the Greta and Wittingham coal measures can be exposed at the surface and lend themselves to both open-cut and underground mining. The Greta Coal Measures thin toward the south and its expression is restricted to the west of the Lochinvar Anticline (Figure 8). The Newcastle and Tomago coal measures thicken from west to east in the Newcastle Coalfields, and coal seams outcrop at the surface along the coastline of the subregion. 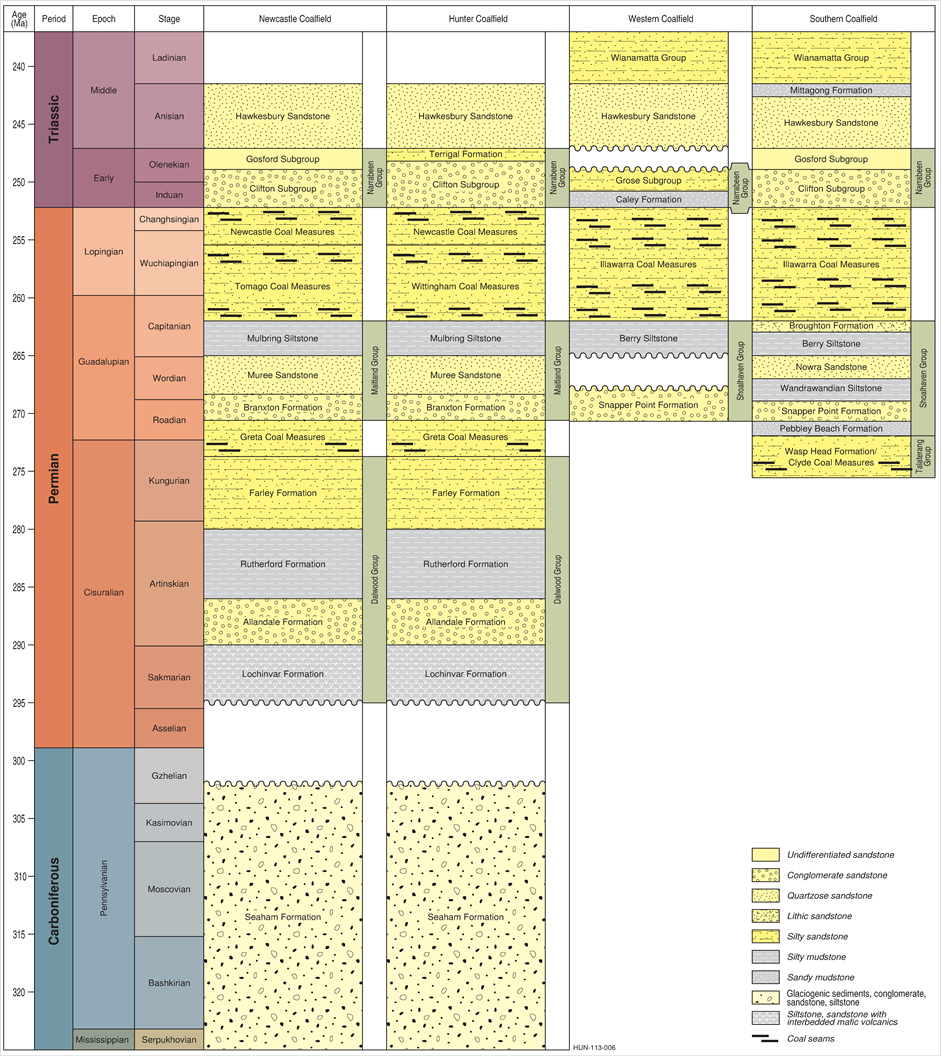 Figure 7 Generalised stratigraphic column of the Carboniferous to Triassic units in the main coalfields of the Sydney Basin. The Southern Coalfields are not present in the Hunter subregion

Younger Jurassic and Cenozoic units that occur in the Hunter subregion are not shown as they do not contain economic coal resources.

This section presents a summary of the hydrogeological characteristics of the Hunter subregion, based on companion product 1.1 for the Hunter subregion (McVicar et al., 2015). In general, the groundwater flow paths follow the direction of the subregion’s topography from the uplands toward the central valley and then to the ocean. Groundwater yield and quality varies across the subregion, and water flow characteristics vary according to whether the aquifers are fractured rock, hard rock, or sand and clay deposits.

The Hunter subregion is dominated by fractured rock aquifers in the Cenozoic Liverpool Range Volcanics and Jurassic, Triassic and Permian sedimentary deposits (Figure 8). Groundwater yields from the volcanic aquifers are typically about 400 m3/day, however, there are water hardness issues due to calcium and magnesium carbonates; the highest yields occur where cavities connect with fractures, and where weathering has occurred in the lava sheet (see Section 1.1.4.1.1 of companion product 1.1 for the Hunter subregion (McVicar et al., 2015)). The surficial fractured rocks often host local groundwater flow and provide baseflow to streams. 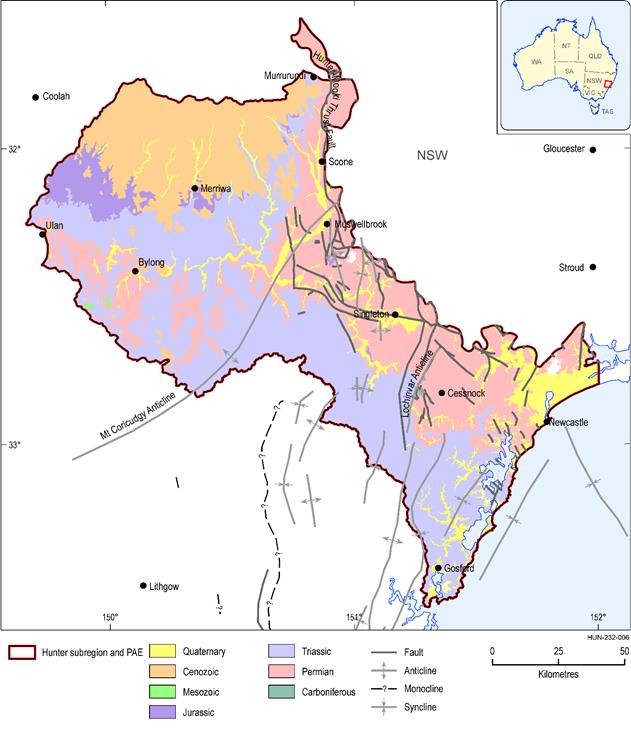 Bore yields in the Jurassic rocks and Triassic Narrabeen Group range widely from 17 to 216 m3/day. These stratigraphic units typically form a sub-horizontal sedimentary sequence of fractured aquifers and aquitards, which provide baseflow to streams in the area. Aquifers may feed springs that are located in the Blue Mountains area in the western part of the subregion. Change in hydraulic conductivity with depth is typically described as an exponential decrease, reaching 10-4 m/day at 400 m depth (Ward and Kelly, 2013, p. 22).

The Permian sedimentary sequence hosts several coal-bearing units, including the Newcastle, Wittingham and Tomago coal measures. The various Permian rock units are commonly fine-grained and have very low primary porosity. Most groundwater flow in these units occurs preferentially along zones of enhanced secondary porosity, such as fault and fracture networks. Enhanced hydraulic conductivity occurs in some coal seams, for example, focused along cleats. Within the Wittingham Coal Measures there are marine transgressions recorded by laminites of the Bulga and Denham formations (Creelman, 1994). They contain the most saline groundwater in the subregion, and discharge of this water via the alluvium is thought to have a controlling influence on the salinity of the Hunter River (Kellett et al., 1989).

The Tomago Tomaree Stockton Sandbeds in the north-east of the Hunter subregion are a major urban water source for the Newcastle-Lower Hunter region. They cover an area of about 183 km2, have the highest diffuse recharge rates in the region at about 25% of rainfall and have transmissivity estimated at 400 to 600 m2/day (Crosbie, 2003). The local groundwater level is responsive to individual rainfall events, which in turn make the aquifer susceptible to contamination so that it has been protected as a water reserve and is listed as a high-priority groundwater-dependent ecosystem (DIPNR, 2003). This area is close to the ocean and has not been subject to mining previously, nor is future mining planned. It is not considered to be hydrologically connected to any mining activity nor considered to be affected by coal mine operations in the Hunter River valley.

The regulated Hunter River alluvium is a significant aquifer for water supply in the subregion with about 76 GL of groundwater entitlements (see Table 10 in companion product 1.1 for the Hunter subregion (McVicar et al., 2015,)). It is a groundwater management unit (GMU) within the NSW Department of Primary Industries (DPI) and has its own water sharing plan (WSP) (DPI, 2005, 2013). These aquifers commonly have coarser material at their base, and vary in thickness from 3 to 17 m, generally increasing in depth downstream. The Goulburn river basin in the west of the alluvium has higher clay content, particularly at the surface, whereas downstream in the Hunter River there are greater fractions of coarse-grained sand and gravel. Hydraulic conductivity varies widely from 10 to 240 m/day (Australian Groundwater Consultants Pty Ltd, 1984). The rivers and alluvium are closely connected, with exchange between the river and near-surface groundwater in the alluvial aquifer. The major recharge source for the alluvial aquifer is considered to be river leakage, although both diffuse recharge from rainfall and upward leakage from underlying rocks contribute water.

(a) block from west to east through the Goulburn river basin, (b) block representing activities adjacent to the Hunter River in the centre of the subregion, (c) block showing activities on the coastline near lakes

Block diagrams are not to scale, but are representative based on the geological model.

Three regional-scale block diagrams of the Hunter subregion are shown in Figure 9 that have been generalised from the regional geological model (see companion product 2.1-2.2 (Herron et al., 2018b)). The first block (Figure 9a) is a section through the Goulburn river basin, just north of the Goulburn River, representing the area from Gulgong to Muswellbrook. In the Western Coalfields the Berry Siltstone is near the surface and provides an aquitard that moves water laterally and feeds surface springs and streams. The coal seams of the Illawarra Coal Measures are also near the surface in the west and subject to both open-cut and underground mine operations. In the west, the Greta Coal Measures become thicker and nearer to the land surface.

The next block (Figure 9b) shows a representative area near the central Hunter River. The surface Hawkesbury Sandstone layers are absent when mapped at this scale, and the Wittingham Coal Measures are the thickest individual unit underlying the region and most of it is close to the surface. This area contains a high density of coal mine operations in the Hunter subregion, most of which target the Wittingham Coal Measures for mining. Localised lateral flows are controlled by spatial variability in aquitard layers and may be different for mine operations targeting different seams in the area and at increasing depth below ground.

The third block (Figure 9c) illustrates operations near the coastal lake systems south of the city of Newcastle. In this area Hawkesbury Sandstone (not shown) and Narrabeen Group form the uplands between river floodplains while coal-bearing deposits, known as the Newcastle and Tomago coal measures, form thick layers and are mined both at the surface and underground. Careful planning is involved for mining close to and below lakes.

As with any underground mining venture, very careful planning and appraisal is required, and each mine is different based on local geological configurations. This lack of regional-scale understanding of the geological structure, and the varying local behaviour of folds, faults and stratigraphic layering, is a gap that needs to be addressed for each mine.

Summary and download
2.3 Conceptual modelling for the Hunter subregion

Data register for product 2.3 Conceptual modelling for the Hunter subregion