The modelling boundary (as defined in companion products 2.6.1 and 2.6.2 for the Clarence-Moreton bioregion) is smaller than the preliminary assessment extent (PAE) since the coal resource development pathway is confined to an area within the Richmond river basin. The surface water modelling area is therefore restricted to within the Richmond river basin, for which the water accounts are being reported.

Water storages in the basin include Toonumbar Dam (capacity 11 GL excluding flood storage), which stores water for hydro-power, irrigation, stock and town water; and Rocky Lake (capacity 14 GL excluding flood storage), which provides water for the towns of Lismore and Ballina. There are four weir structures on the Richmond River near Casino and one on the Wilsons River that provides water to Mullumbimby in the Brunswick river basin. Irrigated pastures are found around the alluvial flats of the Richmond and Wilson rivers and groundwater is used to irrigate fruit and nut crops on the Alstonville Plateau. With only two main water storages and a few weirs, most of the flows in the Richmond river basin are largely unregulated.

The remainder of this product describes: 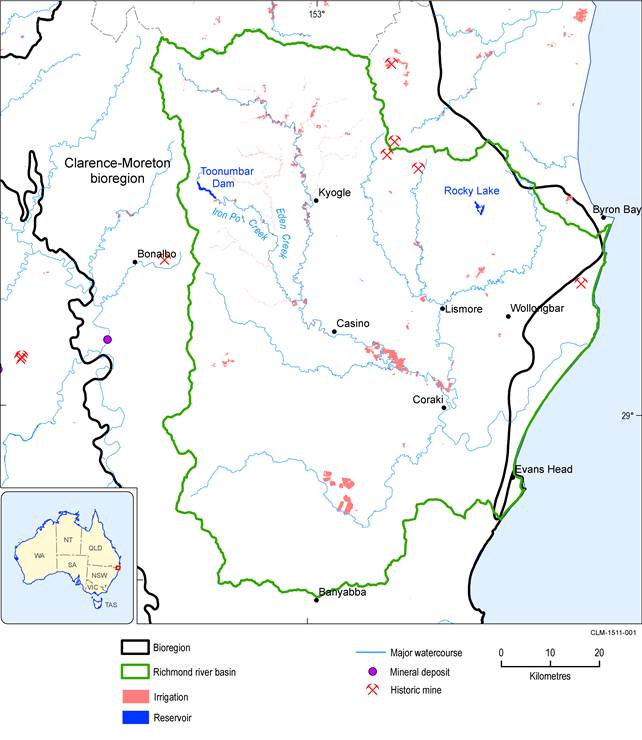 Inflows to the Toonumbar Dam are ungauged but flows are measured below the dam at Iron Pot Creek at Toonumbar (203023). Losses from the Toonumbar Dam storage occur through continual controlled stream releases to supply downstream irrigation and flood releases when storage capacity is exceeded. Mean flows at Iron Pot Creek at Toonumbar were 36.9 GL/year (range4.1–83.5 GL/year). Other sources of outflow such as evapotranspiration from the reservoir surface also account for losses from the storage.

Data: Volumes were obtained from the Bureau of Meteorology (Dataset 1)

In the Richmond river basin, licences amount to 99,881 ML/year. Table 5 summarises surface water licences by purpose and Table 6 by type and water source (definitions of some terms are given in Table 8 of Section 1.5.1.2). Figure 4 shows the geographic distribution and extraction volumes for each licence.

Table 5 Licences grouped by purpose in the Richmond river basin

Water access right refers to the right conferred by law to hold or take water from a water resource. 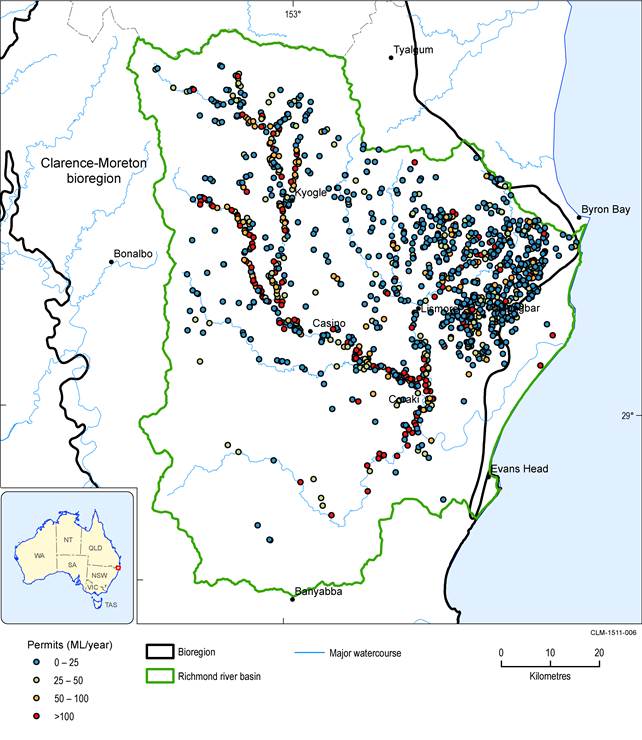 There are several unknown water sources and volumes including:

Some of the sources not included here are implicitly considered, for example, reservoir rainfall and evaporation would be reflected in changes in the storage volume.

Summary and download
1.5 Current water accounts and water quality for the Clarence-Moreton bioregion