The Namoi subregion, within the Northern Inland Catchments bioregion, covers approximately 29,300 km2 in the Murray–Darling Basin in NSW (Figure 2).

The subregion is home to about 27,000 people, with the main centres of Gunnedah and Narrabri located along the Namoi River. Agricultural land covers 77% of the subregion, with irrigated agriculture a large component. The Namoi alluvium supports highly valuable agricultural development that includes cropping of cotton and grains, and livestock grazing on the less arable soils.

The assessment extent (the total area investigated in this assessment) is about 35,660 km2 (Figure 2).

The main near-surface aquifers in the Namoi subregion are associated with the alluvial sediments along the Namoi River and its larger tributaries, the Mooki and Peel rivers, and the Coxs and Pian creeks (Figure 2 and Figure 3). Other aquifers occur within the Great Artesian Basin (GAB) and the Gunnedah Basin.

The Namoi River is the subregion’s main surface water resource. It drains about 42,000 km2 from its headwaters in the Great Dividing Range. Except for the perennial Namoi River, all streams are temporary.

The Liverpool Plains contain endangered native grasslands and riparian vegetation with dominant river sheoaks and willows, and river red gum communities along the larger streams. A wide range of aquatic habitats, including large areas of anabranch and billabong wetlands downstream of Narrabri, add to the ecological importance of the Namoi subregion.

To study potential impacts on these ecosystems, the assessment developed a landscape classification to categorise the main natural and human-modified ecosystems in the assessment extent (Box 7), based on the subregion’s geology, geomorphology (physical features), hydrogeology (the way water moves through porous rocks), land use and ecology. See ‘What are the potential impacts of additional coal resource development on ecosystems?’ for more information.

The assessment also investigated potential impacts on assets based on their ecological, economic or sociocultural values (O’Grady et al., 2015). These include ecosystems such as the state forest of the Pilliga (the largest remaining area of dry sclerophyll forest west of the Great Dividing Range in NSW) and the Pilliga Nature Reserve in the upper catchment of Bohena Creek (the largest reserve in the region). See ‘What are the potential impacts of additional coal resource development on water-dependent assets?’ for more information.

The remaining two mines, Vickery South Coal Project (open-cut) and the Gunnedah Precinct (underground and open-cut), did not have sufficient information to model. The impact and risk analysis provides a commentary on these two developments (Section 3.6 in Herr et al. (2018a)). The assumed timeline of construction and production for each additional coal resource development is shown in Figure 4.

The NSW Government bought back BHP’s Caroona coal exploration licences on the Liverpool Plains in August 2016. This occurred after the finalisation and modelling of the CRDP; thus, the Caroona Coal Project remained part of the modelling even though it is no longer proceeding. As of July 2017, the Shenhua exploration licence for the Watermark Coal Project was reduced by 51.4% to exclude the Liverpool Plains. However, this did not change the operational mining area and therefore the hydrological modelling of the Watermark Coal Project remains relevant.

The coal resources under development in the Namoi subregion are primarily in the Gunnedah Basin, with the main economic coal seams located in the Black Jack Group and the Maules Creek Formation. Two regional-scale block diagrams illustrate the geology associated with baseline and additional coal resource developments (Figure 5 and Figure 6). The Werris Creek Mine is located in the Werrie Basin, adjacent to the eastern side of the Gunnedah Basin. The target coal seams for the Werris Creek Mine are in the Willow Tree Formation (Figure 7). The Hunter-Mooki Thrust Fault System isolates the groundwater in the Werrie Basin from the Gunnedah Basin. For this reason, groundwater modelling did not include the Werris Creek mine. 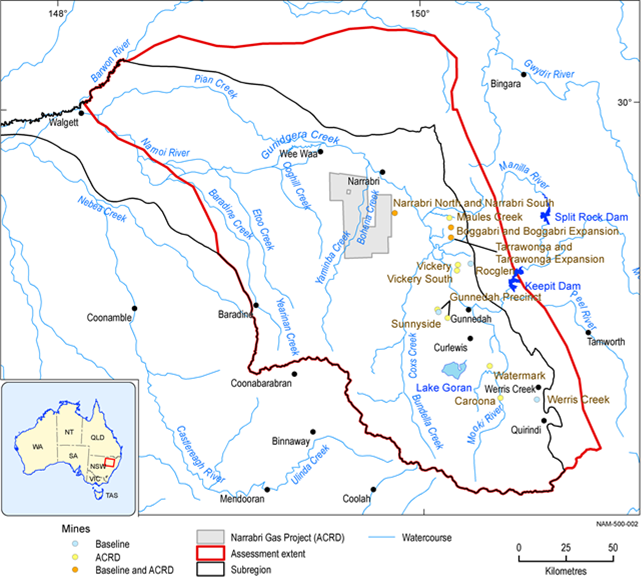 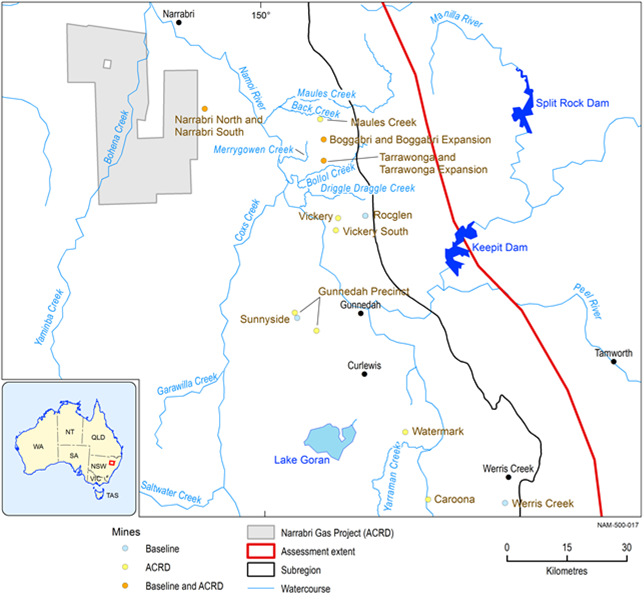 Figure 3 Close-up of part of the Namoi subregion, showing named watercourses in the vicinity of baseline and additional coal resource developments 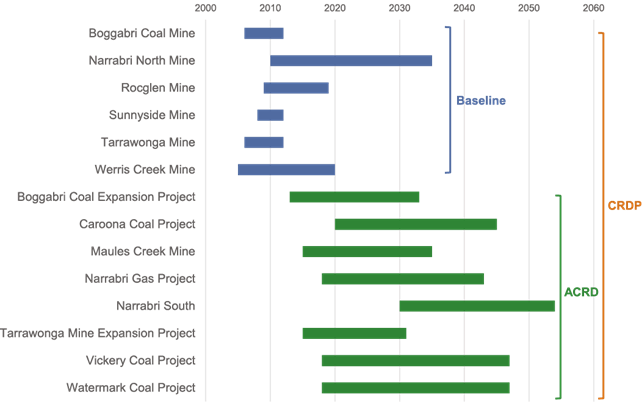 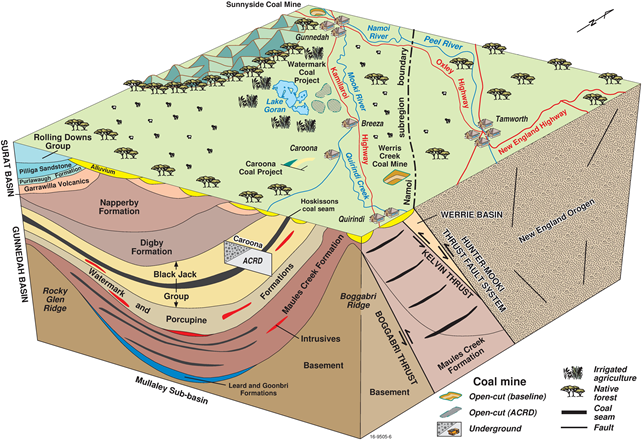 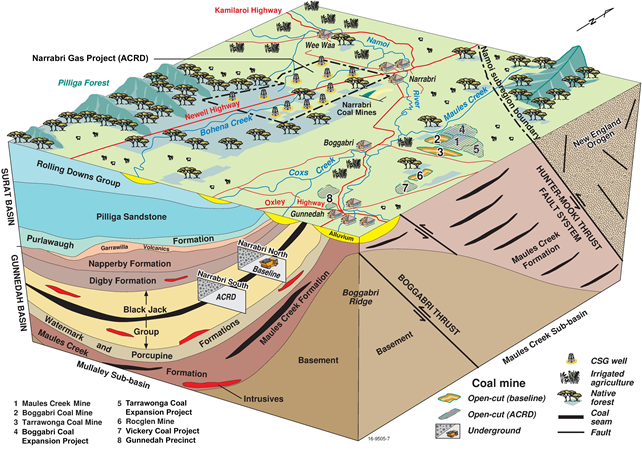 Figure 7 Cross-section of the Werrie Basin

The location of the cross-section is shown as an orange line in the inset map. Fm = formation

Summary and download
5 Outcome synthesis for the Namoi subregion

Data register for product 5 Outcome synthesis for the Namoi subregion