What are the potential impacts of additional coal resource development on ecosystems?

The impact and risk analysis (Lewis et al., 2018) used multiple lines of evidence (Box 7) to investigate how hydrological changes due to additional coal resource development may affect ecosystems in the assessment extent.

These ecosystems are represented by 31 landscape classes (Evans et al., 2018b), which were further aggregated into 11 (bolded) landscape groups (Box 8):

Potential impacts on ecosystems were assessed by first overlaying their extent on the zone of potential hydrological change (Box 5, Figure 13). Assessing potential impacts for the ‘Springs’ landscape group also used other drawdown zones relevant to individual spring source aquifers (such as the Clematis Group aquifer for the Doongmabulla Springs complex).

For the potentially impacted ecosystems within the zone (Table 2), receptor impact modelling (Box 9) was used to translate predicted changes in hydrology into a distribution of ecological outcomes that may arise from those changes. These models used indicators of the health of the ecosystem, such as the annual percent foliage cover for selected tree species, to infer the potential ecological impacts of hydrological changes.

The relative risk to ecosystems is reported using categories defined in Box 10.

The extent of each landscape group is either an area of vegetation (km2), length of streams (km) or number of springs. The landscape groups that have qualitative and/or receptor impact models are also shown.

Due to rounding, some totals may not equal the sum of the individual numbers. 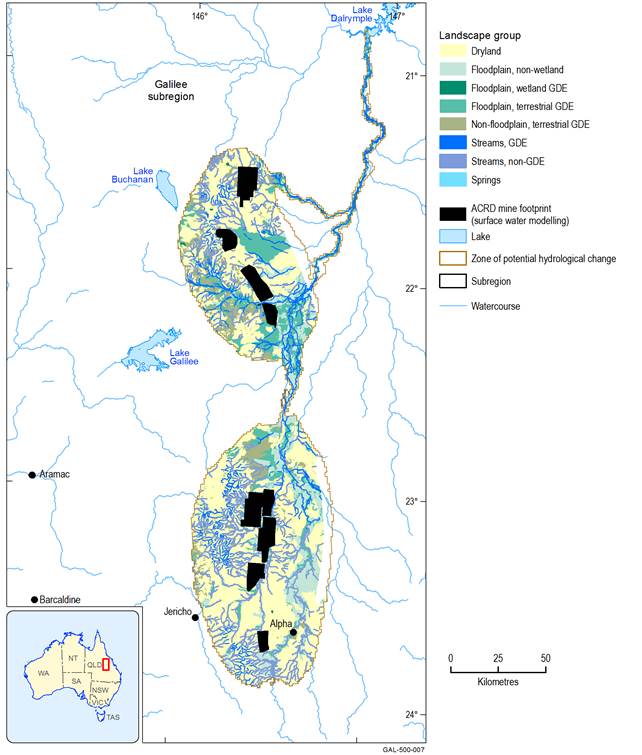 Figure 13 Landscape groups within the zone of potential hydrological change

Which ecosystems are very unlikely to be impacted?

Ecosystems outside the zone of potential hydrological change are very unlikely to be impacted, including:

Within the zone, most (73%) of the ecosystems are categorised as dryland vegetation (8134 km2) or floodplains not connected to wetlands (2098 km2) (Table 2 and Figure 13). These are ruled out as they depend on incident rainfall and localised runoff, rather than groundwater or streams.

Assessing potential impacts to springs uses drawdown zones relevant to the source aquifer for each spring, and these may differ from the zone of potential hydrological change (which relates to the near-surface aquifer). Several spring clusters in the zone defined by the near-surface aquifer, including the Doongmabulla Springs complex, rely on groundwater sourced from deeper (confined) aquifers of the Clematis Group and upper Permian coal measures.

Using the relevant drawdown zones for different spring groups in the Galilee assessment extent shows that 1359 springs are very unlikely to be impacted due to modelled additional coal resource development. This includes 6 springs in the Doongmabulla Springs complex and 1353 GAB springs that are sourced from aquifers of the Eromanga Basin (which partly overlies the older Galilee Basin, Figure 5 and Figure 6). Potential impacts to the GAB (Eromanga) springs, which occur over 50 km west of the seven mines, are ruled out as the groundwater modelling for this assessment indicated that drawdown due to modelled additional coal resource development will not affect any aquifers of the Eromanga Basin (Peeters et al., 2018). This is due to the very thick Moolayember Formation (400 to 1000 m thick), a low permeability regional aquitard layer, that separates the Eromanga Basin aquifers from the underlying Clematis Group aquifer (in areas where greater than 0.2 m drawdown in the Clematis Group is very unlikely).

Which ecosystems are potentially impacted?

Ecosystems that intersect the zone of potential hydrological change (Box 5, Figure 13) are potentially at risk of impact due to additional coal resource development (Table 2, Figure 13).

Three clusters of springs are within the zone: the Doongmabulla Springs complex, Permian springs cluster and Triassic springs cluster. Springs are not explicitly incorporated in the groundwater model, with drawdown at each spring estimated for the model layer interpreted as the source aquifer (e.g. Clematis Group aquifer). However, the regional-scale modelling in this assessment is not well suited to accurate point-scale drawdown estimates, such as for individual springs. This means that more detailed modelling user higher resolution local-scale data is necessary to better understand impacts on springs.

The available hydrogeological evidence to characterise the source aquifers for the springs within the zone is discussed in Section 3.4 of Lewis et al. (2018). The Permian springs are sourced from the upper Permian coal measures (layer 5 in the Galilee groundwater model), whereas the Triassic springs are ‘recharge springs’ disconnected from the regional groundwater system and likely sourced from local sedimentary rock aquifers of Triassic age (such as the Dunda beds, which are not included in the model).

As outlined in Section 3.4.3.1 of Lewis et al. (2018), two different interpretations have been presented by previous researchers for the source aquifer of the Doongmabulla Springs complex; one interpretation favours the Clematis Group as the primary source aquifer, whereas the other proposes the upper Permian coal measures. Appraisal of the available hydrogeological evidence for this assessment, including the regional groundwater flow directions of different aquifers and the topographic location of the springs, suggests that most of the Doongmabulla Springs complex is sourced from the Clematis Group. This means that the drawdown predictions from the Galilee groundwater model for the Clematis Group layer can be used to estimate potential groundwater impacts at Doongmabulla.

The geological structure used in the groundwater model, and the way in which the proposed coal mine operations may affect groundwater levels for each modelled aquifer, was developed to provide the greatest utility and spatial coverage to define the zone of potential hydrological change. However, there are some areas in the zone where both the model structure and the effects of mine dewatering will potentially cause the amount of drawdown to be over-estimated (see Section 3.3 in Lewis et al. (2018) for further information). This will mainly affect areas where the Quaternary alluvium and Cenozoic sediment layer does not occur, such as in the upland regions west of the proposed mines in the zone.

To better understand the likely overestimation of drawdown in these areas, an alternative groundwater model conceptualisation was used to predict drawdown impacts at some specific points. This alternative model provides more robust drawdown predictions in areas of outcropping Triassic rocks in the zone, particularly for the Clematis Group aquifer. The variations between the two model conceptualisations, including discussion of why the alternative approach is more scientifically valid for making drawdown predictions at the Doongmabulla Springs complex, is outlined in Box 3 and explained in detail in Lewis et al. (2018) and Peeters et al. (2018).

Estimates of expected water level reductions due to modelled additional coal resource development within the source aquifers to the various springs indicate that there is some potential for ecosystem impact. This was investigated in this assessment using qualitative models to show the ecological relationships within aquatic communities (see Section 2.7.3 in Ickowicz et al. (2018)). The following ecosystem impacts for the different spring clusters were predicted: 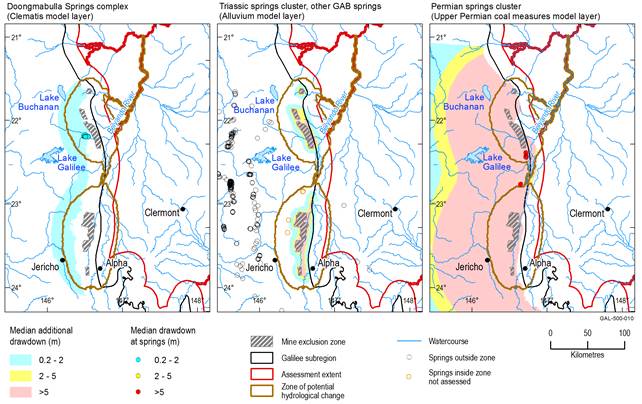 The groundwater component of the zone of potential hydrological change (brown line) was defined by drawdown in the near-surface aquifer (see Box 5). Springs, however, may source water from different deeper layers. Being in or out of the zone defined by the near-surface aquifer therefore does not necessarily signify impacts – rather potential impacts are indicated by drawdown in the relevant source aquifer for that spring. Additional drawdown is the maximum difference in drawdown under the coal resource development pathway and the baseline (Box 1 and Box 4). Because there are no coal resource developments in the baseline for the Galilee subregion, the CRDP includes only the additional coal resource development (ACRD). Results are shown as percent chance of exceeding drawdown thresholds (Box 6). These appear in Lewis et al. (2018) as percentiles.

Almost half (2801 km) of the 6285 km of streams in the zone of potential hydrological change are groundwater dependent (Table 2) and most have a temporary water regime (2541 km of these 2801 km).

Potential hydrological impacts to groundwater-dependent streams include additional drawdown in excess of 5 m, an increase in the number of low-flow days (averaged over 30 years), increased low-flow spells and decreased overbank flows.

This is based on expert opinion, modelled hydrological changes and changes to the chosen ecological indicators (Box 9); more detail in shown in Figure 51 in Lewis et al. (2018).

The remaining streams in the zone of potential hydrological change are not groundwater dependent (3484 km) and so are unlikely to be affected by groundwater drawdown (Table 2). This includes most of the temporary streams (1028 km) in the zone that are potentially impacted but not represented in the surface water model (due to absence of model nodes on these streams), including parts of Bully, Lagoon, North, Sandy and Tomahawk creeks and Carmichael River. Future opportunities to improve the surface water modelling, which include increasing the density of modelling locations on the stream network, are further explained in the ‘Building on this assessment’ section.

Potential hydrological changes include increased number of low-flow days (averaged over 30 years) and low-flow spells along up to 177 km of temporary streams in the zone. The analysis of potential ecosystem impacts indicates that less than 1% of non-groundwater-dependent streams are ‘at some risk of ecological and hydrological changes’ (relative to other streams in the zone) (Box 10) (Figure 56 in Lewis et al. (2018)). These potential changes mainly affect isolated segments of the Belyando and Suttor rivers, just upstream of Lake Dalrymple.

Floodplain, terrestrial GDEs typically occur in areas that are water limited, with low annual rainfall and high evaporation rates (Evans et al., 2014a). In this subregion, most groundwater-dependent remnant vegetation in the zone of potential hydrological change occurs on floodplains (2358 km2 or 62% of groundwater-dependent vegetation in the zone). Vegetation classified as ‘Floodplain, terrestrial GDE’ is located along the western edge of the zone, upstream of the proposed Hyde Park and China Stone mines in the north and upstream of the proposed Kevin’s Corner, Alpha and South Galilee mines in the south (Figure 58 in Lewis et al. (2018)).

About one-third of GDEs in the zone (1189 km2) rely on groundwater associated with clay plains, loamy and sandy plains, inland dunefields, and fine-grained and coarse-grained sedimentary rocks. Additional drawdown in excess of 5 m is very unlikely to affect more than 68 km2 (2%) of GDEs that do not occur on floodplains in the zone. As this landscape group is not associated with streams, it is unaffected by changes to surface water flow. Up to 5% of non-floodplain terrestrial GDEs in the zone are ‘at some risk of ecological and hydrological changes’, and these occur where additional drawdown is greatest (Figure 65 in Lewis et al. (2018)).

Summary and download
5 Outcome synthesis for the Galilee subregion

Data register for product 5 Outcome synthesis for the Galilee subregion