The Galilee subregion in central Queensland, defined by the extent of the coal-bearing geological Galilee Basin, encompasses diverse natural environments from the Great Dividing Range through to vast expanses of semi-arid and arid inland Australia (Figure 2). The 248,000 km2 subregion within the Lake Eyre Basin bioregion includes the headwaters of rivers that flow outwards into Lake Eyre, the Gulf of Carpentaria, the Pacific Ocean and the Murray–Darling Basin.

The Galilee assessment extent of about 612,000 km2 is much larger than the subregion boundary because at the start of the assessment a precautionary approach was adopted to define the area potentially impacted by hydrological changes due to future coal resource development. The main area of interest was further refined and reduced in size during the course of the assessment as more information about the area of potential impact was developed. This process led to the development of the zone of potential hydrological change for the Galilee subregion (Figure 1 and Box 5).

The assessment extent includes the Great Dividing Range and extends further west and north, well into the Lake Eyre surface water catchment and the Flinders–Norman river basin. To the east, outflow from the subregion occurs mainly along the Burdekin River, discharging to the Pacific Ocean near the Great Barrier Reef. Surface water flow is strongly seasonal and can vary greatly from year to year, from almost no flow to major floods. Most rivers and streams are intermittent.

The subregion has several large regional groundwater systems, with the main ones hosted in aquifers of the geological Eromanga and Galilee basins. Due to variability of reliable surface water resources in the subregion, there is a strong dependence on groundwater supplies. Groundwater is used mainly for agricultural purposes, including thousands of stock and domestic bores, as well as town water supplies.

The Galilee subregion is predominantly used for livestock grazing on native pastures and is only sparsely populated with around 20,000 people. The main towns are Blackall, Barcaldine, Hughenden and Charleville. Other than relatively small areas of plantation forestry and minor clearing for pasture improvement, there is very little modification of the natural land cover. This large area has diverse ecological communities and species, as well as biologically significant climate gradients.

The main natural and human-modified ecosystems in the assessment extent were categorised for this assessment through a landscape classification (Box 8), based on the subregion’s geology, geomorphology (physical features), hydrogeology (the way water moves through porous rocks), land use and ecology. See ‘What are the potential impacts of additional coal resource development on ecosystems?’ for more information.

The regional community nominated assets that they consider important due to their ecological, economic or sociocultural values (Sparrow et al., 2015; Bioregional Assessment Programme, 2017; Dataset 3). These include ecosystems such as springs that provide habitat for a variety of plants and animals, groundwater used for agricultural purposes, and sites of heritage or cultural significance. See ‘What are the potential impacts of additional coal resource development on water-dependent assets?’ for more information.

The coal resource development pathway (CRDP, Box 1) defines the most likely future for the subregion. In the absence of commercially producing coal mines or CSG fields in the subregion, the focus of this bioregional assessment is on understanding the potential for cumulative hydrological impacts due to the seven large coal mines initially planned for future development in an area that stretches for about 250 km near the eastern margin of the central Galilee subregion (Figure 2).

Almost all of the proposed coal mine developments are in the headwaters of the Burdekin river basin – in particular, the western flank of the Belyando river basin (Figure 3). The seven developments included in the numerical surface water and groundwater models (Table 1) include the proposed open-cut coal mines Alpha and Hyde Park, and the combined open-cut and underground coal mines Carmichael, China First, China Stone, Kevin’s Corner and South Galilee. Mining operations were modelled based on estimated scheduling as of December 2014 (Figure 4).

The remaining proposed coal mines in the CRDP are the open-cut Blackall, underground Alpha West and Hughenden, and the likely combined open-cut and underground operations at Clyde Park, Milray, Pentland and West Pentland (Table 1 and Figure 2). Plans for these mines were not sufficiently advanced for quantitative hydrological modelling or impact and risk analysis to be undertaken in this assessment. Qualitative analysis of potential impacts on water resources and water-dependent assets due to the seven non-modelled coal mines is reported in the impact and risk analysis (Section 3.6 in Lewis et al. (2018)). It is important to note that the zone of potential hydrological change and the impact and risk analysis reported in this synthesis are based only on the seven modelled coal mines.

The Galilee Basin also has potential for future development of CSG resources. To date, greenfield CSG exploration programs have been undertaken in parts of the central Galilee Basin (Figure 2), with a pilot wellfield established in the Aramac Trough (Figure 5). The three early-stage CSG projects in the CRDP are the Glenaras Gas Project, Gunn Project and Blue Energy’s exploration tenement 813, focused in the central Galilee Basin. At the time of this assessment there was insufficient information about the likely commercial timing and extent of these CSG developments, and they were not evaluated by hydrological modelling. However, similar to the non-modelled coal mines, a qualitative analysis of the potential impacts on, and risks to, ecosystems and water-dependent assets is discussed in the impact and risk analysis (Lewis et al., 2018). Three-dimensional geological cross-sections show the variable depth and extent of the coal-bearing layers in the Galilee Basin, and their relationship with the overlying formations of the Eromanga Basin (Figure 5 and Figure 6).

The regional hydrogeological conceptualisation developed for this assessment is a first for the Galilee Basin and demonstrates many important features, including how groundwater flow systems may interact with aquifers in the overlying Eromanga Basin. Further information about the regional groundwater systems in the Galilee and Eromanga basins is outlined in Evans et al. (2018a and 2018b). 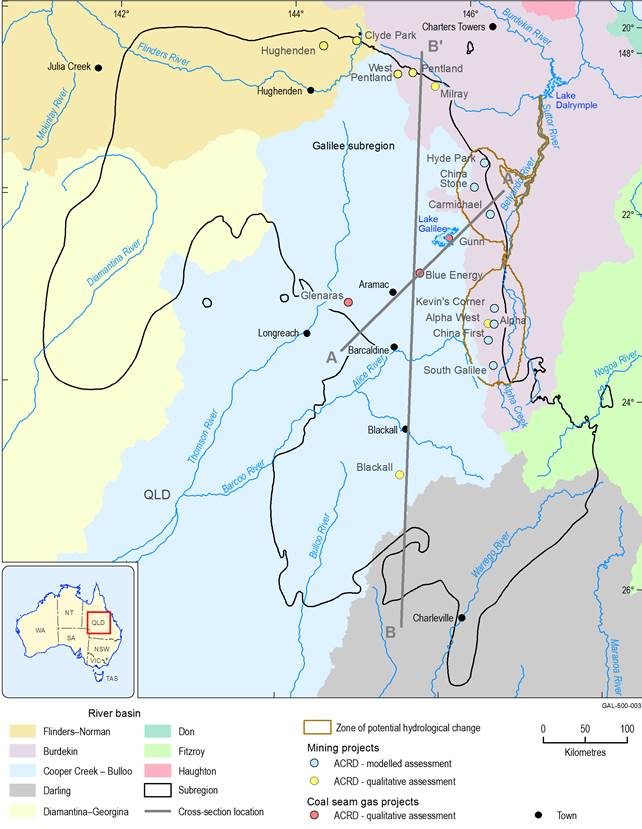 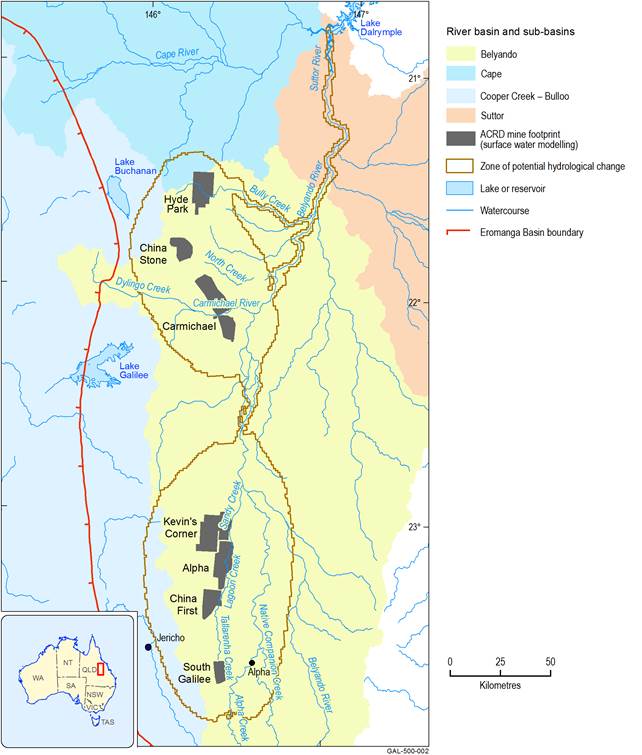 Figure 3 Proposed coal mine extents in the central-eastern Galilee Basin, showing relationship to the zone of potential hydrological change and the main rivers, creeks and surface water catchments

The coal resource development pathway (CRDP) includes baseline and additional coal resource developments (ACRD). Because there are no coal resource developments in the baseline for the Galilee subregion, the CRDP includes only the ACRD. The impact and risk analysis focused on this smaller area where the seven most advanced mining projects occur with sufficient information to include in the hydrological modellings. A qualitative assessment of the potential impacts of the other ACRDs (seven coal mines and three coal seam gas projects) is presented in Section 3.6 of the impact and risk analysis (Lewis et al., 2018). The Belyando, Cape and Suttor river basins are subdivisions of the larger Burdekin river basin (shown in Figure 2). 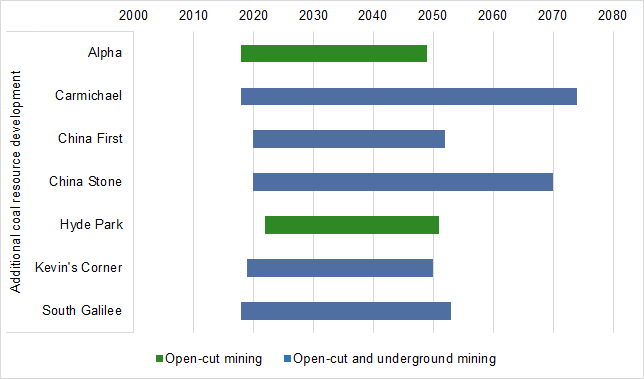 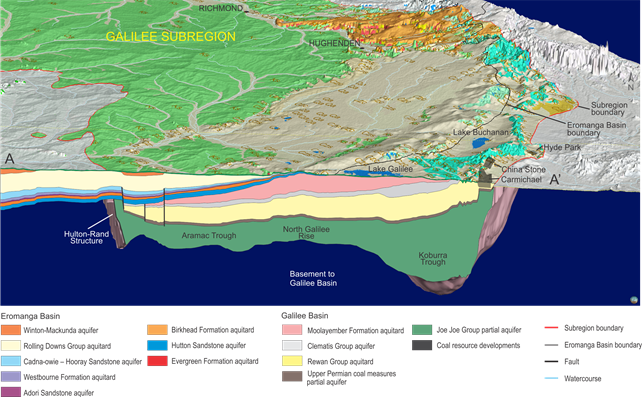 Figure 5 Three-dimensional geological cross-section of the Galilee and Eromanga basins (cross-section A to A’, looking north-west) 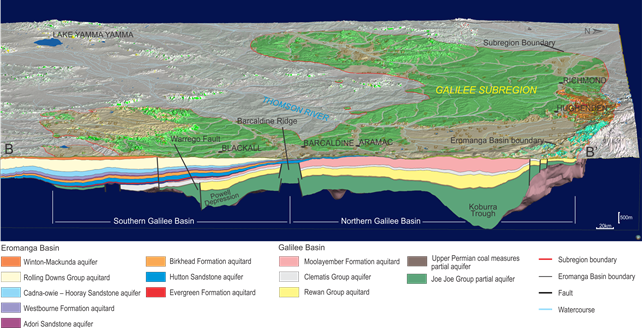 Figure 6 Three-dimensional geological cross-section of the Galilee and Eromanga basins (cross-section B to B', looking west)

Summary and download
5 Outcome synthesis for the Galilee subregion

Data register for product 5 Outcome synthesis for the Galilee subregion