The Hunter subregion covers an area of 17,045 km2, which includes a significant part of the Hunter river basin and all of the Macquarie-Tuggerah lakes basin in NSW. The subregion is defined by the geological Sydney and Werrie basins to the north-east, coastline to the east, and topographic divides with the Hawkesbury-Nepean, Macquarie and Namoi river basins to the south-west and north-west, respectively. Major Hunter River tributaries include the Goulburn, Paterson and Williams rivers, Wollombi Brook and Fal Brook (Glennies Creek). The Hunter River is a regulated river downstream of Glenbawn Dam with regulated flows also coming in from Glennies Creek Dam (Figure 3). Major population centres include Newcastle and Gosford-Wyong along the coast, with smaller urban areas inland, including Maitland, Cessnock, Singleton, Muswellbrook and Scone.

The subsurface geology of the Hunter subregion is characterised by near-horizontal sandstone, shale and coal beds, which have undergone mild deformation. Permian-age coal seams are contained within the Western, Hunter and Newcastle coalfields of the geological Sydney Basin. The area has a long history of coal production; mining commenced in the Newcastle Coalfield near Lake Macquarie shortly before 1800, and expanded into the Hunter Coalfield around Muswellbrook and Singleton in the 1890s, and more recently into the Western Coalfield around Ulan.

Along the subregion coast, the dominant land use is urban, with grazing, production forestry and nature conservation areas prevalent in the hinterland areas of Gosford and Wyong. Underground coal mining continues around and under Lake Macquarie and in the coastal hinterland. Much of the southern part of the subregion is used for nature conservation; dryland grazing and cropping are significant in the northern Goulburn River catchment and along the valleys of its southern tributaries (Figure 4). Along the Hunter River valley, there is a greater mix of intensive land uses including urban, coal mining, energy production and irrigated agriculture. Viticulture and horse studs are very important rural industries in parts of the Hunter river basin.

There is significant competition for water due to high demands from urban, mining, power generation and coal mining sectors as well as the needs of the environment. Environmental water and access to water for consumptive use are managed through a number of water sharing plans that specify extraction limits and water access rights to the region’s surface water and groundwater sources. Along the regulated river reaches, the water storages are the major water sources, while stream and alluvial water sources are important along unregulated reaches. The Stockton and Tomago coastal sand aquifers are important for urban water supply; away from the stream network, fractured and porous rock aquifers can be important water sources, particularly for stock and domestic use. Water source areas, major storages and water access rights are included as economic assets in the asset register for the Hunter subregion (companion product 1.3 (Macfarlane et al., 2016; Bioregional Assessment Programme, 2017; Bioregional Assessment Programme, Dataset 1)).

Concerns about increasing stream salinity levels from industry in the 1990s led to the establishment of the Hunter River Salinity Trading Scheme. This scheme manages the discharge of water by mines and power generators through a system of salinity credits that determine how much salt a participant can discharge and specify the flow rate thresholds above which discharges are permitted. The number of salinity credits is capped and credits can be traded. 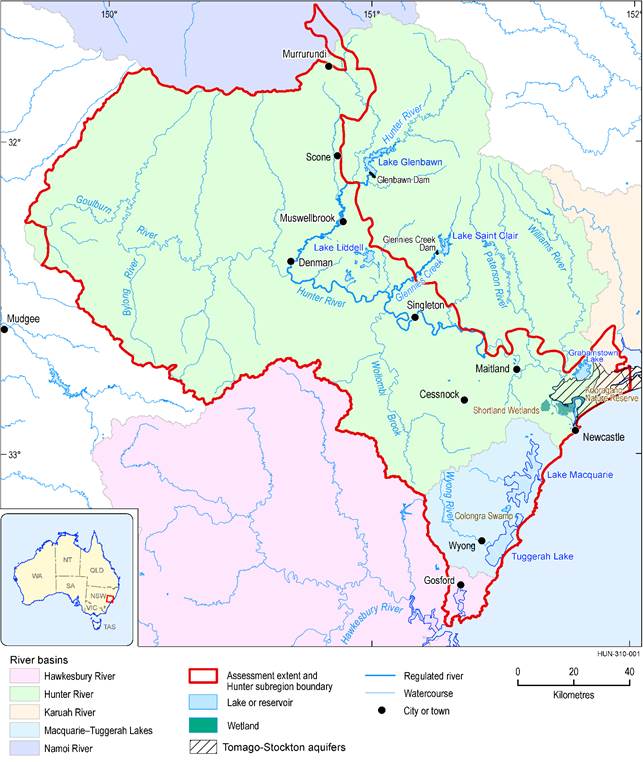 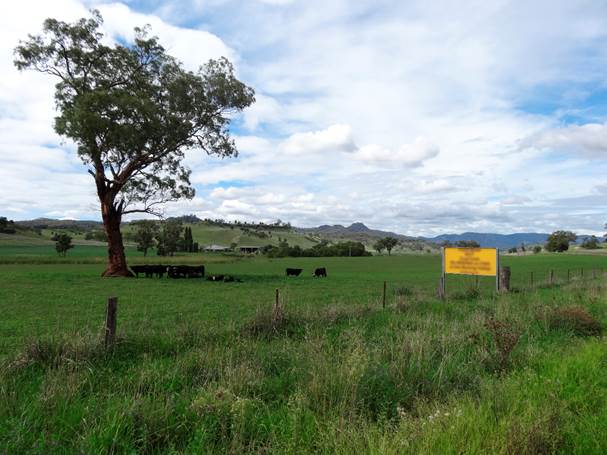 Figure 4 Pastoral lands in the Bylong River valley, where the Bylong coal mine is proposed

The subregion is of great ecological significance because it corresponds to a break in the Great Dividing Range, which provides a link between coastal and inland NSW, and includes an overlap between tropical and temperate climate zones. The asset register for the Hunter subregion (companion product 1.3 (Macfarlane et al., 2016; Bioregional Assessment Programme, 2017; Bioregional Assessment Programme, Dataset 1)) identifies 1652 water-dependent ecological assets including the Ramsar-listed Kooragang Nature Reserve and Shortland Wetlands; 17 wetlands in A directory of important wetlands in Australia (DIWA; e.g. Lake Macquarie, Tuggerah Lake and Colongra Swamp); 6 threatened ecological communities; 7 Important Bird Areas that generally correspond to DIWA wetlands; and 105 flora and fauna species listed under the Commonwealth’s Environment Protection and Biodiversity Conservation Act 1999 (EPBC Act).

An introduction to the geography (physical, human and climate), geology, groundwater, surface water, surface water – groundwater interactions and ecology is provided in companion product 1.1 for the Hunter subregion (McVicar et al., 2015). The conceptual modelling that underpins the impact and risk analysis for the Hunter subregion is described in companion product 2.3 (Dawes et al., 2018).