During the fracture stimulation of a CSG well, the volume of water required for fracture treatment is estimated to be between 0.9 and 2.4 ML per well and 100% of flowback water and 0.5 L/s per well of produced water are estimated to be generated. Produced water volumes per CSG well are expected to be maximum at the commencement of fracturing/testing but to quickly diminish to much lower volumes (typically an order of magnitude lower, Figure 21) (AGL Energy Limited, 2014b, 2015). As part of the Gloucester Gas Project, AGL is planning to treat produced water using reverse osmosis, a desalination technology to reduce the amount of salt in the produced water and to be used for irrigation or returned to the environment (AGL Energy Limited, 2014a). AGL is planning to store the water in dams on Tiedmans Property (Figure 22) or in on-site storage tanks. 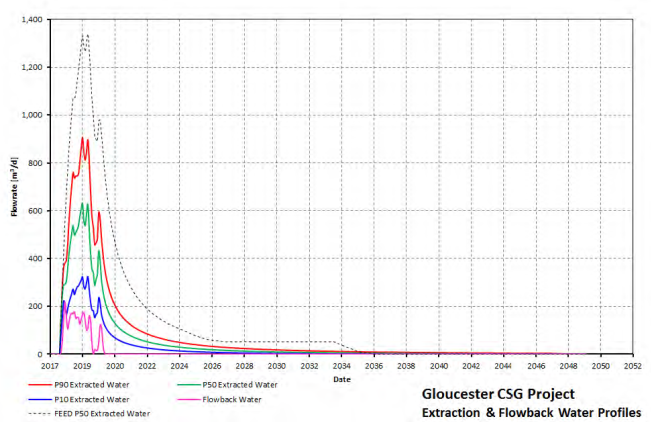 The irrigation areas are located on Tiedmans Property at Stratford about 9 km south of Gloucester (Figure 22). The irrigation period is expected to be 18 to 24 months but may extend to 36 months depending on the final volume of produced water from exploration program activities. The proposal is to irrigate a volume of 70 ML of the produced water in storage over a maximum area of 40 ha over three years. This will include (i) water from exploration programs that is already stored in the Tiedman and Stratford dams, (ii) any rainfall that falls in the dams and (iii) any additional produced water from 2012–2014 exploration activities. This water will be blended with water from the Avon River at a ratio of about three parts river water to one part produced water, to optimise water quality of the irrigated water. The storage dams (Tiedman north, Tiedman south and Tiedman east) are of a ‘turkey’s nest’ style construction with a capacity of 20 ML each (Figure 22). Tiedman south dam is the primary blended water irrigation dam, whereas Tiedman north and Tiedman east dams are used for storing the untreated water pumped during CSG operations.

Two dams were constructed to capture runoff from the trial area during larger rainfall events. There will be no irrigation on the alluvial floodplain soils where there are potential pathways for the irrigated water to flow to the shallow aquifers and the Avon River (AGL Energy Limited, 2012).

AGL holds seven bore licences under NSW’s Water Act 1912 for the commercial/industrial extraction/irrigation reuse of groundwater pumped during flow testing programs with total water allocation volume of 35 ML/year. AGL also holds a water access licence (WAL 19521) and works approval (20CA204347) to extract 32 ML/year from the Avon River source adjacent to the site for irrigation. This fresher surface water will be blended with the stored produced water for irrigation of salt tolerant crops. 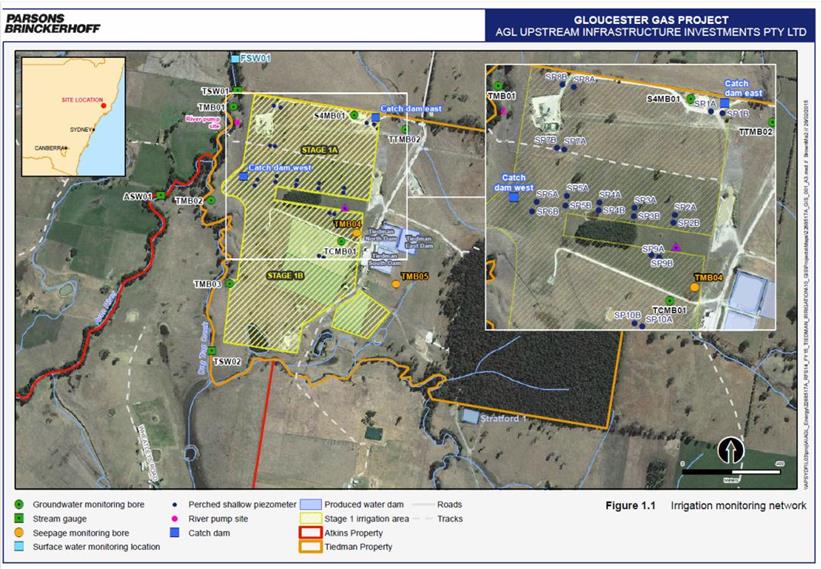 The Waukivory Pilot Project involves the fracture stimulation and testing of four gas wells concurrently (WK11, WK12, WK13 and WK14). The maximum volume of flowback water and produced water likely to be pumped for the four gas wells is 20 ML over the life of the program (14 ML of produced water and 6 ML of flowback water). The volume of water required for fracture treatment is estimated to be between 0.9 ML and 2.4 ML per well and around 6 ML in total for the whole fracture stimulation program expected to be completed by end of 2015. Water for hydraulic fracture stimulation will be sourced from licensed water supply works from either Pontilands (expected allocation is 20 ML per annum) or Tiedman dams, located on nearby properties owned by AGL. The on-site water management involves (Figure 23):

According to AGL’s Produced Water Management Plan (2014b), the produced water strategy is:

It is proposed to reuse all produced water from the Waukivory Pilot Project unless the water quality exceeds a pre‐blending salinity (i.e. electrical conductivity (EC)) of 15,000 μS/cm. The produced water would be blended with fresh water sources (mostly river water) to obtain a blended water mix (i.e. with a salinity level of up to 2000 μS/cm) suitable for irrigating salt tolerant crops. Produced water, flowback water and natural groundwater from the Waukivory Pilot Project are stored on site in above-ground tanks (75,000 L capacity) or open-top tanks (40,000 L capacity) and then transferred by road tanker to the Tiedman dams for either industrial use or blended water irrigation. AGL is planning to treat produced water using a desalination technology, reverse osmosis, to reduce the amount of salt to an acceptable level for irrigation or for returning (a portion of treated water) to the environment during the floods (AGL Energy Limited, 2014a). 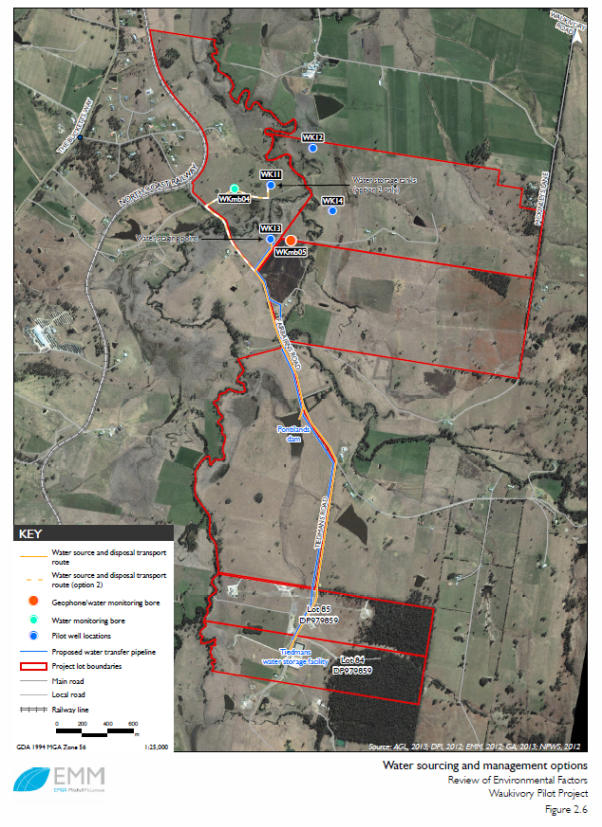