The extent of the Namoi subregion is defined by the Namoi river basin, but terminates in the east against the Hunter-Mooki Thrust fault, which marks the furthest extent of the coal-bearing geological Gunnedah Basin. This determines the eastern extent of the coal resources under consideration. However, the impacts from developing this resource could extend beyond the subregion boundary, or might not extend as far as the subregion boundary due to its remoteness from development or lack of hydrological connectivity.

The PAE is the geographic area associated with a bioregion or subregion in which the potential water-related impact of coal resource development on assets is assessed. It is the first step to identify the potentially impacted assets. 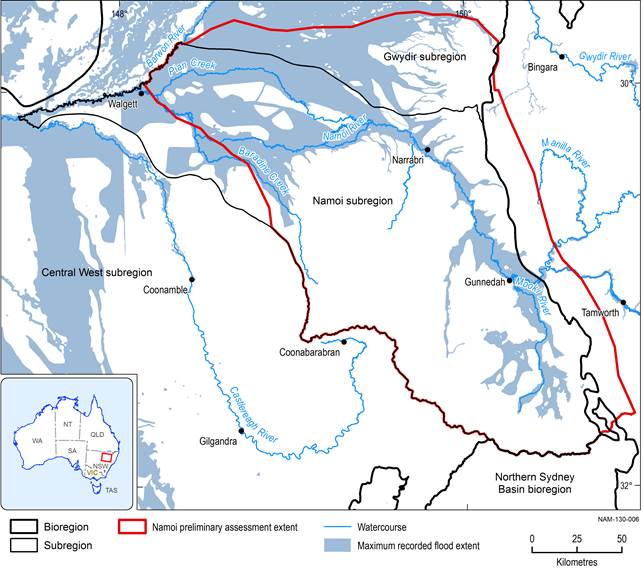 The locations of current and future coal and CSG development are shown in Figure 9 (coal) and Figure 11 (CSG) in companion product 1.2 for the Namoi subregion (Northey et al., 2014).

At the time of the Namoi Catchment water study (Schlumberger Water Services, 2012), their model scenario 3 (Figure 4) was taken to be the most-likely-development scenario. The estimate of the impact from model scenario 3 was an input to determining the extent of the PAE of the Namoi subregion. 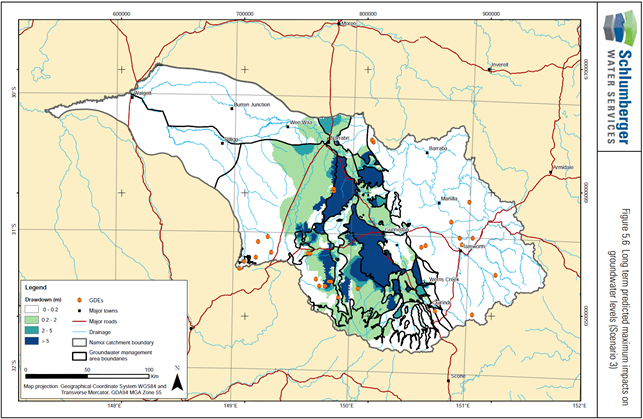 Source: Figure 5.6 from Schlumberger Water Services (2012). This figure is not covered by a Creative Commons Attribution licence. It has been reproduced with the permission of NSW Trade & Investment.

The Hunter-Mooki Thrust fault, which forms the eastern boundary of the Namoi subregion (Figure 3), is likely to be a barrier to groundwater flow because the coal seams, aquifers and aquitards of the Gunnedah and Surat basins abut against much older Paleozoic formations. As a precaution, the PAE of the Namoi subregion extends about 20 km east of the fault line (Figure 3).

For the Cenozoic sediments in the lower Namoi river basin, the impacts could potentially extend across the entire area of occurrence of the Namoi alluvium defined by the Lower Namoi Water Sharing Plan boundary (Smithson, 2009). The same boundary would also be appropriate for the underlying Surat Basin. This is because in both hydrogeological systems, there is some flow into the area, but no groundwater flow radially outwards from the area (see Figure 26 and Figure 27 in companion product 1.1 for the Namoi subregion (Welsh, et al., 2014)).

The maximum surface water impact is taken to be the extent of the largest recorded flood event. This occurred in 1956. Although 1956 was not the wettest year, it followed a very wet 1955, so less rain was able to be absorbed, and the flooding was extensive (see Figure 43 in companion product 1.1 for the Namoi subregion (Welsh et al., 2014)).

Summary and download
1.3 Water-dependent asset register for the Namoi subregion