This section presents the possible causal pathways that may link hazards and water-dependent assets in the Galilee subregion. Hazards that have potential for cumulative impacts for coal mines include dewatering and depressurisation around coal mines, fracturing and subsidence that can occur above underground coal mine longwall panels, and effects of mine infrastructure and mine water discharge on surface water systems. For coal seam gas (CSG) operations, these include depressurisation of coal seams, well integrity, and co-produced water management related issues.

A hazard analysis is used to systematically identify activities that occur as part of coal resource development in the Galilee subregion and which may initiate hazards, defined as events, or chains of events, that might result in an effect (change in the quality and/or quantity of surface water or groundwater). Several hazards are identified; some of these are beyond the scope of bioregional assessments (BAs), such as accidents, and others are adequately addressed by site-based risk management processes and regulation. Hazards associated with CSG operations and coal mines that are considered to be in scope for BA in the Galilee subregion are grouped into four causal pathway groups: (i) ‘Subsurface depressurisation and dewatering’, (ii) ‘Subsurface physical flow paths’, (iii) ‘Surface water drainage’, and (iv) ‘Operational water management’.

A systematic analysis of the potential hazards associated with coal resource development was conducted for the Galilee subregion and underpinned by discussions with relevant experts during a formal workshop. A total of 274 and 260 activities were identified for the Galilee subregion that related to various life cycles of coal mines and CSG operations, respectively. The 30 highest ranking hazards and impact modes were subsequently identified. These 30 top-ranking hazards were then grouped according to their impact modes.

Subsurface depressurisation and dewatering associated with the coal resource development pathway (CRDP) have the potential to directly affect groundwater systems through removal of groundwater. There are a number of geological factors that may either impede or enhance groundwater depressurisation and dewatering. Subsurface physical flow paths can be affected by hydraulic fracturing (CSG only), sub-surface fracturing above underground longwall panels (underground coal mines only), or changes to well integrity. For the Glenaras pilot wellfield, the drilling of horizontal CSG wells along target coal seams is considered to be a more applicable technology for increasing gas flow to CSG wells rather than hydraulic fracturing. Fracturing above longwall panels will occur if longwall mining takes place, but will be confined to areas where underground coal mining has occurred. Detrimental changes to well integrity may result in inter-aquifer groundwater flow that utilises the well as a pathway. 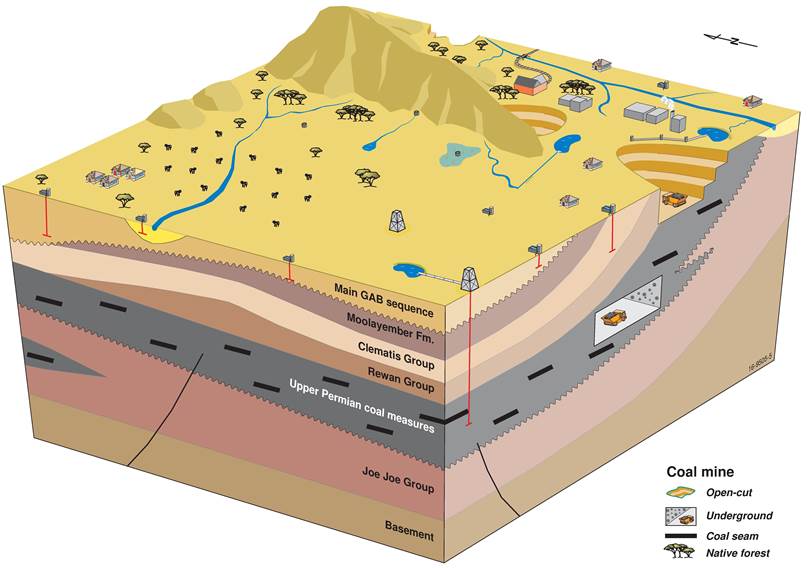 Summary and download
2.3 Conceptual modelling for the Galilee subregion

Data register for product 2.3 Conceptual modelling for the Galilee subregion