Coal resource development and water resources in the Namoi subregion

Regional-scale hydrological modelling indicates that an area of 2299 square kilometres could experience groundwater drawdown due to modelled potential new coal resource developments. The modelling suggests that Back Creek, Merrygowen Creek and Bollol Creek are very likely (more than 95 percent chance) to experience changes in their flow regime. Changes in the streamflow of the Namoi River are predicted to be minimal.

There were six commercially producing coal mines in the Namoi subregion at the time of the assessment in December 2015. Ten potential new coal resource projects were identified, eight of which had enough publicly available information to be included in the numerical hydrological modelling: the open-cut Maules Creek, Watermark and Vickery coal mines; the underground Caroona Coal and Narrabri South coal mines; expansions to the open-cut Boggabri and Tarrawonga coal mines; and the Narrabri Gas project.

There was insufficient information to model the Vickery South Coal Project and the Gunnedah Precinct. The proposed Caroona Coal Project will not proceed, but was included in the modelling for this assessment because the New South Wales Government bought back its licences after modelling had been completed.

The total area where the eight modelled potential new coal resource developments could result in changes in groundwater or surface water is 7014 square kilometres. This area is the zone of potential hydrological change.

The zone of potential hydrological change also includes 5521 kilometres of streams. However, potential changes were not modelled for 3629 kilometres of these streams. Regional-scale modelling indicates that changes in the streamflow of the Namoi River are minimal. The same modelling suggests that Back Creek, Merrygowen Creek and Bollol Creek are very likely to experience changes in their streamflow, particularly in the number of zero‑flow days.

What might that mean for ecosystems and water-dependent assets?

Potential impacts on ecosystems that depend on the near-surface aquifer or streams are limited to the zone of potential hydrological change.

Impacts cannot be ruled out for two springs on the eastern edge of the Pilliga region because it is unclear whether these springs source their water from the surface aquifer used to define the zone. Further local-scale investigations are required to determine the magnitude of any potential impacts.

Of the 1690 ecological assets in the assessment extent, 624 are in the zone of potential hydrological change. Of these, 161 intersect areas that are more at risk of hydrological changes than other areas in the zone and may merit closer attention when considering potential impacts. These include the potential habitats of five threatened ecological communities and 11 threatened species listed under the Environment Protection and Biodiversity Conservation Act 1999. For 10 assets in the zone, risk could not be quantified because surface water modelling was not available.

Of the 8953 bores in the assessment extent, 8424 are very unlikely to be impacted due to potential new coal resource development. Outside the mine pits, there are 118 bores with more than five percent chance of more than 2 metres drawdown, 14 with at least 50 percent chance and 1 bore with at least 95% chance.

Further details on the results can be found in Assessing impacts of coal resource development on water resources in the Namoi subregion: key findings (product 5). More specific information on the impacts, including the sensitivity of different ecosystems to hydrological changes, can be found in the impact and risk analysis (product 3-4).

They developed regional groundwater and surface water models for this assessment. The natural and human-modified ecosystems in the subregion were classified into 29 landscape classes to enable a systematic analysis of potential impacts on, and risks to the water-dependent assets nominated by the community. The landscape classification was based on the subregion’s geology, geomorphology, hydrogeology, land use and ecology. These landscape classes were aggregated into six landscape groups based on their likely response to hydrological changes. Potential impacts were identified by overlaying landscape classes and assets on the modelled changes in hydrology and, in some cases, by ecological modelling.

Local councils, natural resource management groups and community groups provided information on water-dependent assets that they value, such as threatened and endangered species, wetlands and water sources. A register of these assets is available for use in future assessments.

The data and tools from this assessment are available to support natural resource management in the Namoi subregion. They can be used in future assessments and environmental studies.

Results from this assessment are provided in 12 reports, a water-dependent asset register and a data register at www.bioregionalassessments.gov.au/assessments/namoi-subregion. The website provides open access to the methods and datasets used to develop the assessment. Explore the subregion in more detail on BA Explorer, at www.bioregionalassessments.gov.au/explorer/NAM. Data from a range of disciplines are provided under a Creative Commons Attribution license where possible, on the Australian Government’s public data information service www.data.gov.au.

Visit www.bioregionalassessments.gov.au to find out more about the Bioregional Assessment Program. 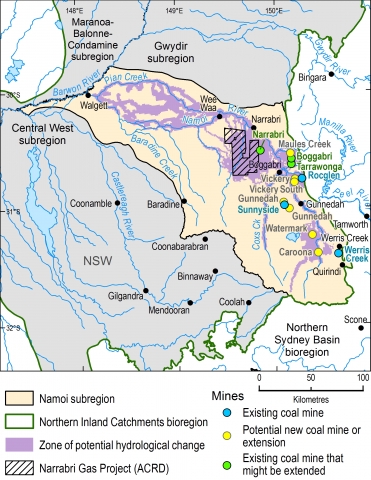 Where is the Namoi subregion?

The Namoi subregion covers about 29,300 square kilometres of the Murray–Darling Basin in central New South Wales. It is part of the Northern Inland Catchments bioregion and includes the towns of Gunnedah, Narrabri and Walgett.