Coal resource development and water resources in the Hunter subregion

We assessed how 22 potential new coal mines or expansions of existing coal mines could affect groundwater and surface water resources in the Hunter subregion.

Regional-scale hydrological modelling indicates that an area of 2441 square kilometres could experience groundwater drawdown due to potential new mines or mine expansions. About three-quarters of this area overlaps modelled drawdown due to existing coal mines. Large changes in flow regime are possible in Wyong River, Loders Creek, Saddlers Creek, Wollar Creek and a number of ephemeral creeks. More detailed local information is needed to determine the level of risk. For example, using local information from the Wallarah 2 environmental impact statement greatly reduces modelled changes in the flow regime of the Wyong River. Lack of information meant some mines were not included in the hydrological modelling.

About 1228 kilometres of streams and 102 square kilometres of groundwater-dependent ecosystems—mainly rainforests, forested wetlands, and wet and dry sclerophyll forests—are potentially affected by changes in groundwater or surface water. Further analysis is needed to determine the level of risk to these ecosystems. Modelled changes in hydrology could affect the management of the Hunter Regulated River or the reliability of water supply in some unregulated streams, but more detailed local information is required to determine the level of risk.

There were 42 existing coal mines in the area (22 open-cut and 20 underground) when the bioregional assessment started. Twenty-two potential new projects were identified: four new open-cut mines (Bylong, Mount Pleasant, West Muswellbrook, and Drayton South which is no longer proceeding); two new underground mines (Bylong and Wallarah 2); and 16 expansions to existing operations. These 22 projects are known collectively as ‘additional coal resource development’. Some of these mines were not included in the hydrological modelling for the assessment because information about them was insufficient.

At the time of the resource assessment in December 2015, there was no coal seam gas production in the subregion and no proposals for future developments.

The total area where there is at least a five percent chance that additional coal resource development will result in potential changes in groundwater or surface water is 3213 square kilometres. This area is known as the zone of potential hydrological change.

The zone of potential hydrological change also includes 1228 kilometres of streams with potential changes in flow. Large changes in flow regime are possible in Wyong River, Loders Creek, Saddlers Creek, Wollar Creek and a number of ephemeral creeks. More detailed local information is required to determine the level of risk. For example, when hydrogeological information from the Wallarah 2 environmental impact statement was used to constrain the range of modelled results based on regional parameters, results suggested a small chance of an increase of about 7 days in the average number of low-flow days per year in the Wyong River, compared to more than 200 days using the regional information. Potential hydrological changes are smaller in the Hunter and Goulburn rivers and implications for ecosystems and water-dependent assets that depend on these rivers are discussed below.

What might that mean for ecosystems and water-dependent assets?

Potential impacts due to additional coal resource development are ruled out for two Ramsar-listed wetlands (Kooragang Nature Reserve and Shortland Wetland); habitats of 16 species listed in the Commonwealth’s Environment Protection and Biodiversity Conservation Act 1999; Ginger Beer, Parnell, Wappingguy and Wild Bull springs; 48 parks and reserves including Brisbane Water National Park, Camerons Gorge Nature Reserve, Hunter Wetlands National Park and Karuah National Park; and important bird areas Brisbane Water and Hunter Estuary. The critically endangered Wollemi Pine is considered unlikely to be impacted because it is a rainforest species and is unlikely to be dependent on groundwater.

Changes in mean annual water availability in the Hunter Regulated River at Greta are very likely to exceed 5 gigalitres per year (less than 1% of mean annual flow), but very unlikely to exceed 12 gigalitres per year (approximately 1.6% of mean annual flow) in the period 2013 to 2042. These reductions are smaller in subsequent decades. Because flows in the river are regulated, these hydrological changes may increase the volume of water released from Glenbawn and Glennies Creek dams to maintain environmental flows. There is a small chance that additional coal resource development could affect the reliability of water supply in some unregulated streams.

There is a 5% chance that groundwater drawdown due to additional coal resource development will exceed 2 metres at 11 water supply bores that are not used for mining. This level of drawdown may trigger ‘make good’ provisions under NSW legislation.

Further details on the results can be found in Assessing impacts of coal resource development on water resources in the Hunter subregion: key findings (product 5). More specific information on the impacts, including the sensitivity of different ecosystems to hydrological changes, can be found in the impact and risk analysis (product 3-4).

They developed regional groundwater and surface water models for this assessment. The natural and human-modified ecosystems in the subregion were classified into 26 landscape classes to enable a systematic analysis of potential impacts on, and risks to the water-dependent assets nominated by the community. The landscape classification was based on the subregion’s geology, geomorphology, hydrogeology, land use and ecology. These landscape classes were aggregated into five landscape groups based on their dependence on surface water and groundwater sources. Potential impacts were identified by overlaying landscape classes and assets on the modelled changes in hydrology and, in some cases, by ecological modelling.

Local councils, natural resource management groups and community groups provided information on water-dependent assets that they value, such as threatened and endangered species, wetlands and water sources. A register of these assets is available for use in future assessments.

The data and tools from this assessment are available to support natural resource management in the Hunter subregion. They can be used in future assessments and environmental studies.

Results from this assessment are provided in 12 reports, a water-dependent asset register and a data register at www.bioregionalassessments.gov.au/assessments/hunter-subregion. The website provides open access to the methods and datasets used to develop the assessment. Explore the subregion in more detail on BA Explorer, at www.bioregionalassessments.gov.au/explorer/HUN. Data from a range of disciplines are provided under a Creative Commons Attribution license where possible, on the Australian Government’s public data information service www.data.gov.au. 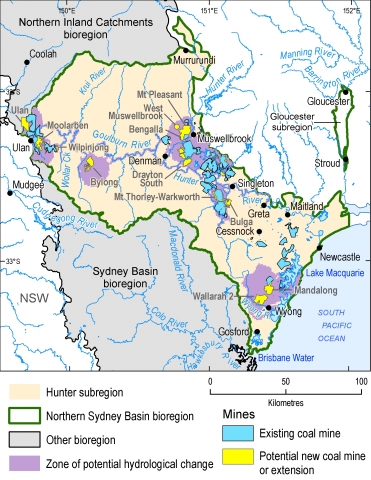 Where is the Hunter subregion?

The Hunter subregion is in New South Wales. It covers 17,045 square kilometres and includes the cities and towns of Newcastle, Gosford, Cessnock and Muswellbrook.